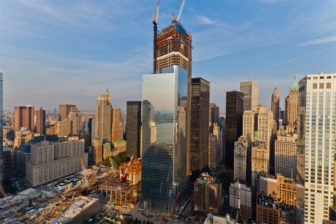 The reconstruction of the World Trade Center, which reopened for business only last month, is estimated to cost $3.8 billion. Insurers paid out more than $40 billion in claims stemming from the 9-11 attacks.

Washington – Insurers like The Hartford and Travelers were left in the lurch last week when the Senate failed to approve a federal backstop for coverage they offer businesses to protect them from a terrorist attack.

“It is unconscionable that the U.S. Senate would adjourn without finishing their job and reauthorizing a long-term Terrorism Risk Insurance Act when the threat of a terrorist attack against the United States is at the highest level it has been in a decade,” said David A. Sampson, president of the Property Casualty Insurers Association of America.

Some businesses that carry that coverage won’t lose it immediately. But others have conditional clauses that say the insurer will not pay out on a terrorism-related claim if the federal program is not in place. And unless Congress acts soon next year to reinstate the backstop, many insurers will add exclusions for terrorist attacks to their policies or increase premiums for that coverage so much that many businesses may find them unaffordable.

“Without TRIA in place on January 1, insurers will be forced to assess their exposures,” said Leigh Ann Pusey, president and CEO of the American Insurance Association.

Real estate, transportation, construction, energy, and utilities are considered the most vulnerable to losses from an attack, placing the nation’s economy at risk. Sports stadiums are also dependent on that coverage, and the Senate’s failure to reauthorize the terrorism risk insurance spawned some concerns, unfounded as it turns out, that the Superbowl might have to be cancelled.

After insurers paid out more than $40 billion in claims from the 9-11 attacks, reinsurers withdrew from the markets. Without reinsurance, primary insurance companies were forced to exclude terrorism coverage from their policies.

So Congress stepped in by approving the Terrorism Risk Insurance Act in 2002, that, in effect, made the federal government a reinsurer for terrorism coverage. So far it has not had to pay on any claims.

Earlier this month the House reauthorized TRIA, raising the trigger for the federal backstop from the current amount of $100 million per incidence to $120 million starting in 2016. The move would have extended TRIA by six years.

But the Senate, which had scheduled a vote on the terrorism risk insurance as one of its last acts of the 113th Congress, was thwarted by Sen. Tom Coburn, R-Okla., who blocked passage of the bill over a states’ rights issue unrelated to terrorism insurance.

Now the terrorism risk program will expire at the end of the year.

“I am profoundly dismayed by the impending expiration of TRIA. Now, billions of dollars of projects and hundreds of thousands of jobs are at risk,” said Sen. Chuck Schumer, D-N.Y., a main sponsor of the bill.

Connecticut Rep. John Larson, D-1st District, a member of the House Ways and Means Committee, said, “It’s absolutely shameful that a bill so important to economic development and stability across the country could not be passed before the end of this session.”

“The American people should not have to accept that this important measure has now been kicked down the road,” Larson said.

The Hartford and the Travelers Insurance Co. declined repeated requests for comment.

But The Hartford spokeswoman Shannon Lapierre said her company has not decided whether it will stop offering that coverage.

According to lobbying disclosure reports, The Hartford and Travelers spend millions of dollars each year lobbying Congress. One of the top lobbying priorities for both companies is the reauthorization of the terrorism risk program.

The PCI’s Sampson said, “TRIA plays a vital role in our national economic security. If a massive attack occurs before TRIA is reauthorized, there could be no terrorism insurance coverage or taxpayer protection.”

He said the industry is “profoundly disappointed by the dysfunction in Washington” and urged the new Congress to “address a long-term reauthorization of TRIA immediately when they convene in January.”

But Democrats are upset the House’s TRIA bill included a provision that would roll back a provision in the Dodd-Frank financial reform act. The measure would allow “end users,” such as energy and agricultural companies, to avoid requirements imposed on banks when they use derivatives as a hedge, but not for speculative gain.

The two measures are likely to inspire an uncooperative spirit among the Democrats when the TRIA comes up for action next year. They may try to block reauthorization until that provision is removed.