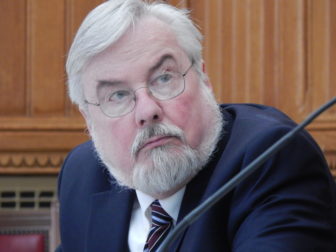 The governor also announced the Department of Emergency Services and Public Protection Commissioner Dora Schriro will return for a second term. The leaves Joette Katz of the Department of Children and Families as the only commissioner whose second-term status is not publicly known.

Macy, who took the top spot at DDS in April 2011, had been executive director of SARAH Tuxis Residential & Community Resources, Inc., which provides support services to individuals with disabilities at several locations along the central Connecticut shoreline.

In a letter sent Monday to DDS staff, Macy did not discuss his future employment plans. The governor indicated he would appoint a replacement in the coming weeks.

“It has been an honor to have been chosen by Governor Malloy to lead this large state agency serving persons with intellectual disability and autism,” Macy said.  “I am proud of the agency’s many accomplishments over the past nearly four years…It has been a privilege to work along so many talented and extraordinary individuals, including our agency staff, persons supported by DDS, their families, staff from other state agencies, and our private and public providers.”

The department serves more than 19,000 individuals with intellectual disabilities, including more than 4,000 infants and toddlers.

During Macy’s tenure as commissioner, the department:

“The state of Connecticut and the Department of Developmental Services strive to partner with individuals and their families to create and promote meaningful opportunities for our residents to fully participate as valued members of their communities,” Malloy said. “Commissioner Macy’s leadership has helped DDS carry out this core mission, particularly serving persons with intellectual disabilities and autism. I appreciate his service to the state and thank him for what he has provided in this core function of state government.”

“I am proud to serve in the Malloy administration, one that is distinguished by the governor’s unwavering support of all first responders in the state,” said Schriro, who is the first woman to head Connecticut’s public safety operations. “I look forward to building on our successes in the areas of prevention, response, and recovery and to continue to make our state safer and more resilient to any disaster or emergency we may face.”

“Thanks to the efforts of folks on the state, local and federal levels, in addition to community-based nonprofits and other community advocates, Connecticut is experiencing its lowest violent crime rate in four decades, twice as low as the national average,” Malloy said.  “Working with Commissioner Schriro and the team of law enforcement officials at DESPP, we can expand these practices, build on these efforts, and improve the quality of life in communities throughout Connecticut.”

The Malloy 2.0 Scorecard
Malloy is dribbling out his reappointments, so we’re keeping a scorecard of who is staying for his second term.