Malloy appointees get holiday raises of up to 12% 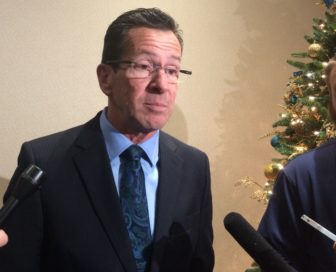 Gov. Dannel P. Malloy, pictured after a recent speech: No raise for him or other elected officials.

The holidays will be a little merrier for about 200 appointees of Gov. Dannel P. Malloy and other constitutional officers: They are getting raises ranging from three percent to 12 percent at an annual cost of $1.4 million.

The raises were announced by Ben Barnes, who oversees the budget as the secretary of policy and management. His salary jumps by 12 percent, from $186,999 to $209,439.

All the raises take effect on Dec. 26.

For Barnes and most of the other top officials, including the governor’s chief of staff, Mark Ojakian, the raises are the first since joining the Malloy administration. Barnes came on board on Jan. 5, 2011, the day the governor took office.

He is the top-paid political appointee. After the raises, the highest-paid commissioners will be making a little more than $190,000 annually.

A press release went out at 4:34 p.m. under the name of Gian-Carl Casa, the undersecretary of policy and management.

At the time, he was sitting on an airplane in Baltimore, connecting on a vacation flight to Florida. Reached by cell phone on the tarmac, he did arrange for the full list of raises to be forwarded to The Mirror.

The raises come a month after the administration ordered $48 million in emergency spending cuts and restricted hiring and purchasing to help offset a projected shortfall.

“For the last four years, most appointed officials have not seen their salary change as they have worked tirelessly to improve the lives of Connecticut families,” Barnes said in the emailed statement.

OPM Secretary Ben Barnes and Chief of Staff Mark Ojakian were among those receiving 12 percent raises.

“Because of their hard work, we are seeing the results in many areas, such as a steadily improving economy that’s added over 75,000 jobs since 2011.

“We want that progress to continue over the next four years and need to be able to attract and retain top-notch talent so our citizens are served by the very best. To do that our salaries must remain competitive with those of other states and the private sector.”

The raises were pegged to years of service, with most officials getting a three percent raise for each year they have held their current job, going back to January 2011. Barnes, Ojakian and appointees hired at the start of the administration got 12 percent raises.

Malloy and the other elected officials, whose salaries are recommended by a bipartisan commission, are getting no raises.

Salaries of Top Malloy Appointees
The old and new salaries of the governor’s chief of staff and his returning commissioners. The commissioners with 0% raises are recent interim appointees. The raises take effect Dec. 26.
OPM