With ‘lockboxes’ for toll receipts, there are lots of ways to pick the lock

Though Gov. Dannel P. Malloy would consider restoring tolls if Connecticut creates a legal “lockbox” to ensure receipts are spent on transportation, other states have struggled to keep their “boxes” locked.

And because Connecticut’s transportation program relies on many funding sources, guarantees to protect toll receipts might mean little if other sources are diverted.

The main purpose of such “lockboxes,” critics argue, is to give political cover to officials looking to raise new fees or taxes for transportation.

“Dedications, restrictions and prohibitions on diversion are not always effective,” researchers for the National Conference of State Legislatures wrote in a 2011 analysis of states with legal mechanisms to safeguard gasoline tax receipts.

At that time, 23 states had constitutional provisions restricting the use of fuel tax revenues.

And this past November, voters in Maryland and Wisconsin ratified similar restrictions.

Still, despite their popularity, there are a host of ways around these “lockboxes.”

Of the 23 states whose restrictions on fuel tax receipts were analyzed in the 2011 report, only six states specifically prohibited their use for anything other than transportation.

In some states, the key to the “lockbox” is spelled out when it is created, either in a constitutional amendment, a statute, or in transportation bond contract language.

Virginia allows the governor and legislature to divert funds from transportation, provided officials also establish a plan to repay those dollars within three years.

Maryland’s new “lockbox” allows diversions provided the governor declares a fiscal emergency and each chamber of the legislature agrees in a three-fifth’s vote.

‘Lockboxing’ only a portion of funds

Though tolls and gasoline taxes draw the most attention, Connecticut and many other states rely on other sources of funding as well to pay for transportation programs.

For example, the Special Transportation Fund in the Connecticut budget is projected to receive about $1.5 billion in revenue next year. About 60 percent of that will come from the state’s retail gasoline tax and wholesale levy on gasoline and other fuels.

The remaining 40 percent comes from various license and permit fees and other motor vehicle receipts, as well as a major subsidy from the budget’s General Fund – which receives receipts from the income, sales and most other major taxes.

The subsidy owed transportation next year, according to current law, is $150 million.

If that subsidy is repealed, as Malloy and the legislature did in each of the last two years, transportation funding probably would shrink, even if tolls were added right away.

The former state Transportation Strategy Board estimated in 2011 that restoring tolls would yield $50 million to $75 million in annual receipts.

The Devon rail bridge across the Housatonic River could cost $750 million to replace.

In other words, putting toll and fuel tax receipts in a “lockbox” wouldn’t protect transportation if other sources of funding weren’t given similar protection.

In New Jersey, the constitution dedicates fuel tax and a portion of sales tax receipts to transportation. But other traditional sources are spelled out only in statute – a requirement that easily can be waived through the passage of another law. According to the NCSL report, “the legislature has chosen not to fully appropriate the statutory revenues (for transportation) eight times since 1985.”

Even if legal mechanisms were set up requiring toll, fuel tax and other traditional transportation receipts to be spent on “transportation purposes,” who decides what that term means?

But the DMV wasn’t always funded with transportation dollars.

And if the legislature and governor can’t raid toll or fuel tax receipts from the transportation fund, could they instead move non-transportation expenses into that fund?

R. Nelson “Oz” Griebel, who chaired the Transportation Strategy Board from 2001 through 2005, said this is a potential weakness in any “lockbox” system, but still could be addressed.

Griebel, who is president of the MetroHartford Alliance, said the strategy board – which favored a “lockbox” mechanism – had anticipated that loophole.

One solution, he said, would be to restore the strategy board or establish a similar watchdog board that could be asked to advise, or even to approve, any new spending categories for the state transportation fund. A group that reflects the public and private sectors, business and labor, could enhance the lockbox’s security, he said.

“It’s hardly perfect, but the concept is to put enough tension in the system that people would have to think about what is good for the state” before diverting transportation funding, Griebel said. “That type of tension, from groups with an interest in transportation, can be a healthy tension.”

One of Connecticut’s most vocal advocates for greater investment in transportation, Joseph McGee, vice president of the Business Council of Fairfield County, said he understands Malloy’s calls for a “lockbox,” given recent history. 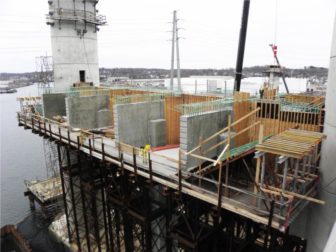 The state will collect about 40 percent more in fuel taxes this year than it did in 2005, when lawmakers and Gov. M. Jodi Rell ordered five increases in its wholesale fuel levy.

Over the same period, more than $1.4 billion in fuel tax receipts have been spent on non-transportation programs, and Connecticut has amassed between $12 billion and $20 billion in vital highway and rail improvement projects currently deemed “unfundable.”

“Clearly the public needs to be assured that this money is being used for the purposes that are presented to them,” McGee said. “There is a great deal of skepticism out there, and it absolutely is warranted.”

Joseph F. Brennan, president of the Connecticut Business and Industry Association, said a “lockbox” mechanism would enhance business confidence in the state’s intentions, but so would additional efforts to streamline state spending.

Tolls can provide additional funding for transportation, but reduced spending elsewhere also could free up resources for highways, bridges and rail lines.

Malloy has said he will unveil a major new transportation investment plan when he delivers his next budget to the legislature in February.

And while a “lockbox” proposal may help Malloy make his pitch, the governor also would benefit from working closely with the business community to plan and sell the initiative, said McGee, who was state economic development commissioner in the early 1990s under Gov. Lowell P. Weicker Jr.

“Ninety-five percent of the people in Connecticut have no clue about how great the need is” for transportation investment, McGee added. “We have got to do a much better job, in the public and the private sector, of explaining to our citizens how we could improve our economic prosperity and quality of life.”