Utility regulators make a pitch for independence from DEEP

Nearly four years after Connecticut’s independent utility regulatory body became part of the newly formed Department of Energy and Environmental Protection — over the objections of many who argued such a move constituted a conflict of interest – the regulators are asking for their independence back.

A 19-page, year-end memo from the three commissioners of the Public Utilities Regulatory Authority (PURA) to Gov. Dannel P. Malloy’s office summarized PURA’s work in 2014 and set out priorities for 2015. Among the 2015 concerns, and taking up nearly one-third of the document, was the issue of PURA’s independence.

“At its core,” the memo states, “having PURA adjudicate energy and utility issues with considerable financial consequences when its parent authority is a statutory party to every proceeding before it, presents an insurmountable conflict of interest.”

PURA came into existence in its current form in 2011 when DEEP was created from the old Department of Environmental Protection. Part of the goal was to bring an energy department to Connecticut for the first time since the 1970s.

DEEP’s energy policy component was created using people who had handled energy matters in the Office of Policy and Management, as well as some from PURA’s predecessor – the Department of Public Utility Control (DPUC).

In it’s new configuration, DEEP became responsible for creating energy policy. That meant that as PURA regulated that policy — just as the DPUC before it had — DEEP would necessarily be a party to any review. And that set up what many felt was the inherent conflict outlined in the memo.

The memo, which is not required and PURA has never done before, comes on the heels of particularly contentious rate increases approved late last year for Connecticut Light and Power, and similar ones for United Illuminating in 2013.

It also follows several unexpectedly busy years as the two utilities sought additional revenue to compensate for spending in the wake of several massive storms, including Irene and Sandy. The actions have pushed PURA, generally poorly understood by the general public, into less-than-welcome prominence.

The Authority has come under withering fire on many fronts because of the CL&P rate increases, culminating in a war of press releases just before New Year’s in which PURA uncharacteristically struck back publicly at Sen. Richard Blumenthal after he called the rate decision “unconscionable and horrendous” and said that PURA was “unwilling and unable to impose fairness.”

PURA Chairman Arthur House, who took over in May of 2012, about a year after the DEEP-PURA merger, said in an interview that the independence issue has been in the background for a long time, and he has discussed it informally with Gov. Malloy and DEEP Commissioner Rob Klee.

House is also quick to support the creation of DEEP, but said: “Whenever you do something that’s very large like that, you very rarely get it right the first time.”

He said, and the memo states, that staying within DEEP for administrative purposes would be fine.

One of his arguments is that Connecticut is the only state with a public utility regulatory structure like this – an assertion confirmed by the National Association of Regulatory Utility Commissioners.

“There’s no enthusiasm for copying Connecticut,” House said. “In fact everyone wonders how we continue to function that way.”

House said the delineation of duties is confusing to the attorneys and other parties who appear before the authority. “I know of no supporters for the current system other than those who created it,” he said.

His point was underscored by Scott Hempling, a noted public utility attorney and expert. At the time DEEP and PURA were formed, Hempling provided a 42-page memo that largely questioned the propriety of placing PURA within DEEP. In an interview this week, he once again questioned the relationship, given that DEEP also controls PURA’s budget.

“That’s unprecedented and that is a problem,” he said. “There’s value to independence because independence allows you to make the decisions that are uncomfortable in a political sense but are better for people in the long run.” The PURA memo liberally cites Hempling’s earlier concerns.

But Hempling said in the interview he did not know how things had worked out. “For all I know everybody thinks the place is a dreamboat now,” he said.

There is a rocky utility regulatory history at play in Connecticut, stretching back to dissatisfaction with the old DPUC, and right now the idea of independence is meeting with something akin to shrugs.

“This does pop up occasionally,” said Rep. Lonnie Reed, D-Branford, co-chair of the legislature’s Energy and Technology Committee. She is not only the only returning member among the committee’s leadership and ranking members, but also the only one of them who has served on the committee before this session.

“There are concerns of how it looks on paper,” she said of the DEEP/PURA structure. “But I see PURA functioning totally independently. They really are an independent organization.”

Reed and others who would speak only privately noted that before the existence of an energy department in Connecticut, the DPUC had the whole energy spectrum to itself. They attribute some of the push for independence to long-time employees still suffering bruised egos as control of certain functions has shifted. And many point to clashes of personalities, which they also say – and the memo notes – have settled down considerably since Klee became DEEP commissioner a year ago. 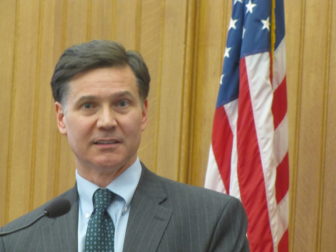 House specifically related an incident in the 2013 UI rate case when then-Commissioner Dan Esty allowed direct negotiations between UI and DEEP before taking the rate case to PURA. A DEEP spokesman said that was an experimental effort to bring negotiated rates to PURA. It’s an approach that was used recently in the case of the Frontier takeover of AT&T U-verse telephone landlines, and one that is likely to surface again as DEEP and the administration begin to explore modernization of the electric grid in the next few months.

Others say the issue is money and personnel. In 2011, before the shift to PURA, the DPUC had 115 authorized employees. Now there are 70 with another 15 previously at the DPUC housed in the energy policy bureau at DEEP.

PURA’s budget, like the DPUC’s before it, comes from $22 million in ratepayer funds. But now that money covers PURA, energy staff at DEEP and parts of other shared administrative services that PURA no longer handles.

House said, while he would like PURA to regain control of its budget and personnel, his concern is adjudicatory independence.

The last time re-establishing PURA’s independence surfaced seriously was in 2012. Legislation to return PURA’s independent status while leaving it in DEEP for administrative purposes was unanimously approved in the Energy and Technology and Appropriations committees, but never made it to the floor. Testimony was pointed and included an anonymous letter from PURA staff citing specific instances, including names, of DEEP conflicts and interference with PURA procedure.

Reed, who was co-vice chair of Energy and Technology at the time, supported it, but now she said she’d have to hear more about what PURA is proposing. “I think things went pretty well last year,” she said. “They certainly have exercised independence in decisions that they’ve been rendering.”

That sentiment was echoed by Paul Mounds, director of governmental affairs in the governor’s office, who spoke for the administration, including DEEP. Mounds, one of the recipients of the memo, cited the CL&P rate case in which the governor, DEEP and other parties argued strenuously against any increase in the fixed rate all customers pay.

“We wrote a letter; DEEP wrote a letter,” he said. “PURA went in a different direction.” (PURA allowed about one-third of the requested increase.)

Mounds said the memo had not been shown to Malloy yet. “Initially it’s not in our plan to have a restructuring of the PURA/DEEP structure at this time,” he said.

House said he would abide by whatever decision the governor makes. In the meantime, he said: “I’m trying to make it work – that’s my job.”