Malloy to Connecticut: Get home, stay there 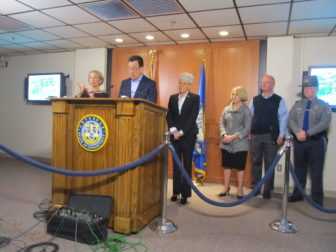 “Do not get on the roads unless you absolutely have to,” Malloy said Monday in a storm briefing at the Emergency Operations Center in Hartford.

Snow was forecast to fall as heavily as five inches an hour at times, driven by winds capable of producing drifts of three to four feet and knocking out power to more than 100,000 households, Malloy said.

“Do not take the storm lightly,” Malloy said. “We do not.”

Metro-North added trains from 1 p.m. to 5 p.m. to get as many commuters home as possible before an evening rush that coincided with the arrival of a storm predicted to intensify at midnight and then continue for another 24 hours.

Connecticut Transit buses were to cease service at 8 p.m. Monday.

“This afternoon, please get off the roads as early as possible. If you can leave work early or work from home, please do so,” Malloy said. “Do not plan on travel unless absolutely necessary from Monday evening through the duration of the storm.”

Malloy warned that the drifting snow was expected to complicate and prolong cleanup.

“We encourage citizens to stay in place during the duration of the storm,” Malloy said. “Please be patient and allow the crews to do their work.”

The governor said the rate of snowfall probably would exceed the ability of ConnDOT’s 600 plows to keep up at times, and he warned that conditions will delay the restoration of power.

“I think it’s important to note if you are without power, you are going to be without power for a period of time, in all likelihood several days,” Malloy said.

The Motor Transport Association of Connecticut, which represents 800 trucking companies in the state, said its members were advised to get off the roads by late afternoon.

“We appreciate that the governor gave ample warning that he had decided to impose the traffic ban. As a result, we have enough time to make today’s deliveries and cope with the logistical problems which will present themselves through the rest of the week,” said Michael J. Riley, the president of the association.

Riley said the Department of Energy and Environmental Protection opened parking lots at Hammonasset State Park in Madison and Sherwood Island State Park in Westport as truck refuge areas where out-of-state truckers could wait out the storm.

The governor extended all deadlines for renewing motor-vehicles licenses, registrations, permits and other credentials. Late penalties for renewals due Jan. 24 will not resume until Jan. 31.

The company said it was poorly timed. The workers had planned the action before the storm was forecast.