Unlike Cuomo, Malloy got the politically perfect storm 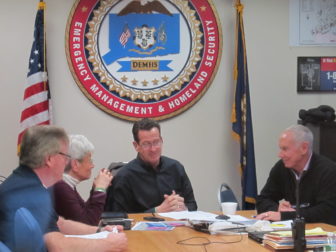 In New York, the second-guessing of Gov. Andrew Cuomo was well under way when Gov. Dannel P. Malloy stepped to the microphones in Hartford for a final uneventful briefing Tuesday on a blizzard that could have been named Storm Goldilocks in Connecticut.

Politically, the storm was just about right.

Forecast to be one for the record books, the storm caused barely a handful of accidents, no major traffic snarls and only scattered power outages, yet it still was fierce enough so that Malloy did not have to defend imposing a statewide travel ban from 9 p.m. Monday to 2 p.m. Tuesday.

Only 15 accidents were reported on the state’s nearly empty highways during the storm, none with life-threatening injuries. Hundreds of state highway crews worked through the night without hindrance.

“This is great response, great cooperation,” Malloy said of the state’s reaction to his travel ban. “And I think a great success.”

In New York, Cuomo was reported as defensive during his morning briefing. He had virtually shuttered the city in anticipation of a storm that produced a run-of-the-mill snowfall in Central Park, ordering drivers off the roads and the first snow-related closure of the subway system in its 110-year history.

Ryan Hanrahan, an NBC Connecticut meteorologist, said he could sympathize. Forecasters were certain the storm would produce a 40-mile band of snow capable of dropping up to five inches an hour, more than enough to paralyze the region. Exactly where that band would go was another matter.

“Does that happen over New York City, and Cuomo looks like a genius for shutting down the subway? Or it happens over eastern Long Island, and Cuomo doesn’t look so good,” Hanrahan said. “We need to do a better job of communicating what we know for sure and what may change in the forecast.”

The storm track drifted east, taking the Long Island Expressway away from the buttoned-up and hunkered-down city. New Yorkers awoke to find a light layer of snow – and a subway that didn’t begin rumbling to life until 9 a.m.

New York Mayor Bill de Blasio, who banned food takeout during the storm, noted he was not consulted on the subway closing, but he also refrained from criticizing Cuomo.

“You can’t be a Monday morning quarterback on something like the weather,” he said, according to the New York Times. “Would you rather be ahead of the action or behind? I will always err on the side of safety and caution.”

Cuomo said he acted on the best forecast available and had no apologies.

In a conference call with reporters, Louis Uccellini, the director of the National Weather Service, didn’t apologize, but he expressed regret for the service having failed to communicate its uncertainty about the forecast.

In New York, depending on which forecast he was consulting, Cuomo saw a strong likelihood that the city was going to get significant snow – and probably believed it had a one in three chance of getting one to three feet, Hanrahan said. 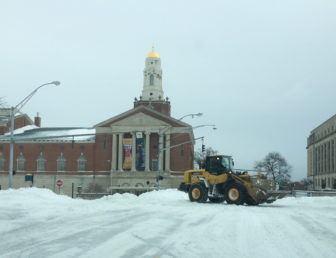 A payloader clears snow on empty Capitol Avenue in Hartford at midday Tuesday before the travel ban was lifted.

Just as the military sometimes is prepared to fight the last war, politicians often can be accused of responding to the previous storm.

Cuomo, who was so decisive Monday, was roundly criticizing for responding slowly to the lake-effect snow responsible for Bunyanesque snowfalls over Buffalo. He acknowledged Tuesday he was thinking of Buffalo when he acted Monday.

When Michael Bloomberg was mayor, he was accused of overreacting to Irene, which was relatively gentle on New York, and then under-reacting to a vicious Sandy.

One of the lessons of the February 2013 blizzard in Connecticut was to get cars off the roads so the plows can keep going, Malloy said. With snowfalls of four or five inches an hour, once the plows fall behind, clearing the streets can require payloaders and other heavy equipment, such as the 15 super-sized, truck-mounted snow blowers owned by the state Department of Transportation.

And that can take days, he said.

Malloy, who took a call Tuesday about the state’s storm recovery status from Vice President Joe Biden, said he was aware that the public can be uncooperative or worse if they deem their governors to be crying wolf.

“That’s why I’m anxious to reopen the roads as quickly as they can be reopened. Otherwise, people can lose their faith in what we’re telling them,” Malloy said Tuesday afternoon. “By closing the roads at 9 p.m., there is no doubt that we avoided hundreds of accidents that otherwise would have taken place.”

Malloy lifted the travel ban on local roads in Litchfield and Fairfield Counties at 8:30 a.m. Tuesday, a reflection that snowfall was lightest in the western third of the state.

“I’m sure you’re getting it in Greenwich and Stamford, but you had a pretty good chunk of the state that picked up between 18 and 30 inches,” he said. “East of 91, they got a pretty serious snowstorm.”