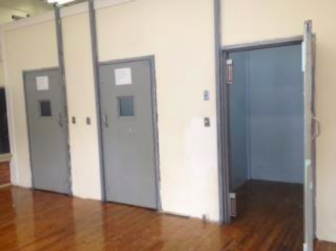 Rooms where students are secluded at an unidentified Connecticut school.

Utility and storage closets and “cell-like spaces” are some of the places students with autism and other special education needs are inappropriately put when they misbehave, according to an investigative report released Wednesday by the Office of the Child Advocate.

Among the many cases cited in the report was that of 12-year-old Marcus, who was put in seclusion after banging on his desk, singing loudly or not moving in the hallway after being asked to do so.

“The door would then be closed, with Marcus left screaming and yelling to be let out. Sometimes Marcus’s banging and punching the walls included hurting his own hands and head,” the advocate’s investigation found.

The state watchdog casts serious doubt on whether public and private schools’ are complying with state laws governing restraint and whether schools are able to de-escalate misbehavior using evidence-based practices. Schools report that 2,500 students each school year are being physically restrained or secluded in a room they can’t leave.

State law bars schools from restraining or secluding students except in an emergency or when their individual educational plan provides for such measures.

“The State Department of Education has too few resources (though ample will) to investigate and monitor schools’ actual compliance with the law or best practices,” the child advocate, Sarah Eagan, reported.

She said her office’s findings were based on observations, data reviews, field work, and responses to citizen concerns.

The findings “raise significant concern regarding the frequency with which young children with disabilities were restrained or secluded, the lack of documentation or actual compliance with state laws, and the prevalence of unidentified and unmet educational needs for children subject to forceful or isolative measures,” the report said. “Significant concern is also raised regarding the spaces used for seclusion.”

Seclusion spaces varied from doorless, comforting spaces to brick utility closets, storage closets and padded rooms, the report said. While some spaces included comforting and sensory materials, many did not.

In her report, titled, “Seclusion and Restraint in CT Schools: A Call to Action,” Eagan said no research exists that shows benefits from the use of restraints or seclusion.

The State Department of Education has reported that 1,313 students have been injured while being restrained or secluded over the last three school years.