Malloy gets flu shot, then jabs Christie, Paul on vaccines 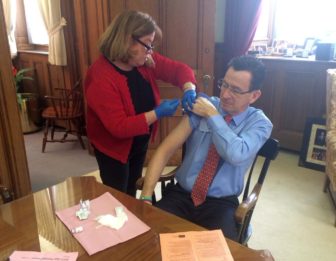 Gov. Dannel P. Malloy got a flu vaccination in his office Friday

When you’re Gov. Dannel P. Malloy, even getting a flu vaccination can be political, especially when it comes during a measles outbreak that has cast a harsh light on two presidential contenders accused of trying to appeal to vaccine doubters.

Malloy’s office released a photo of the governor getting a flu shot Friday at the State Capitol. In a brief interview, the Democrat then unloaded on U.S. Sen. Rand Paul of Kentucky and New Jersey Gov. Chris Christie, who held forth recently on the issue of vaccines.

“You couldn’t watch TV or read a paper and not understand that Rand Paul and Gov. Christie have stepped all over themselves trying to appeal to the folks who deny that the world is anything but flat,” Malloy said.

Paul linked vaccines to mental disorders. Christie said he favored allowing parents latitude over whether their children should be vaccinated, while hastening to add his own children received the full array of shots recommended by physicians.

“Anybody who is feeding into this thing and leading people to believe that it’s reasonable that they don’t vaccinate their children is making a terrible mistake,” Malloy said.

Paul, an ophthamologist, told CNBC this week he had personal knowledge of children “who wound up with profound mental disorders” after getting immunized against diseases like measles. But he ultimately had his children vaccinated.

“Do I think it’s ultimately a good idea? Yeah,” Paul said of vaccinations. “So I had mine staggered over several months. I’ve heard of many tragic cases of walking, talking, normal children, who wound up with profound mental disorders after vaccines. I’m not arguing that vaccines are a bad idea; I think they’re a good thing. But I think parents should have some input. The state doesn’t own your children; parents own their children, and it is an issue of freedom.

Malloy said that Paul should provide details of that knowledge — “put up or shut up.”

Christie was drawn into the fray when asked about the issue of immunizations while on a trade trip to Great Britain. His answer seemed to put him at odds with state law in New Jersey, which sets narrow conditions under which a parent can refuse immunizations.

His office later issued a clarification.

“To be clear: the governor believes vaccines are an important public health protection and with a disease like measles, there is no question kids should be vaccinated,” said Christie spokesman Kevin Roberts. “At the same time different states require different degrees of vaccination, which is why he was calling for balance in which ones government should mandate.”