On the way to Germany, Murphy meets with Lieberman in Tunisia 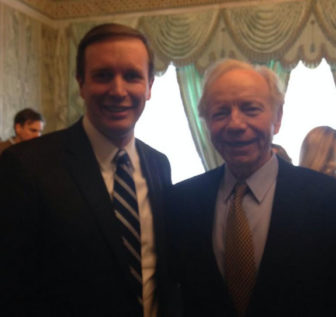 Sen. Chris Murphy and his predecessor in the U.S. Senate, Joe Lieberman, in Tunisia.

Washington – Sen. Chris Murphy, a member of the Senate Foreign Relations Committee, went with other lawmakers to Germany this weekend to attend a global conference on security in Munich, Germany.

On their way, however, they stopped over in Tunisia, where Murphy ran into former Connecticut Sen. Joe Lieberman.

Murphy’s office said the delegation of lawmakers — including Sen. John McCain, R-Ariz. — stopped on the way to Munich to meet with Tunisian leaders. A new coalition government was installed on Friday after its approval by the Tunisian parliament.

Tunisia, by the way, has recently signed a contract to purchase about a dozen Sikorsky Black Hawk helicopters made in Connecticut, worth about $700 million.

A small world: Lieberman was in Tunisia, too, and Murphy tweeted a photo of their reunion. The former senator has been an observer of Tunisian democracy for many years and has called the country “the Middle East’s most promising soil for democracy.”

Murphy was elected to fill the retired Lieberman’s seat. But the two men are poles apart on foreign policy.

Lieberman has a conservative world view and strongly supported the Iraq war.

Murphy condemned the war and launched a web site this week calling for a progressive foreign policy. He said ChanceForPeace.org was inspired by a famous speech by former President Dwight D. Eisenhower, in which he said, “Humanity is hanging from an iron cross” and called for reduced military spending.

In an op-ed released this week, Murphy said, “Today, progressives have become at best, reactive, and at worst, absent, from serious, meaningful foreign policy debates.”

He said “part of this retrenchment” is the fact a Democratic President Obama is in charge of foreign policy and Democrats are hesitant about criticizing a commander-in-chief from their own party.

Murphy also wrote, “The dominance of the President, Senator McCain, and Senator (Rand) Paul on foreign policy should trouble progressives.”