The Democratic governor, who has pledged not to raise taxes, is expected to recommend a much greater transportation investment before his next biennial budget plan in released on Feb. 18. Republican legislators are questioning whether the governor will propose a way to pay for it.

With their proposal, Republicans attempted to demonstrate that the upcoming Malloy plan hinges on unnamed tax hikes. 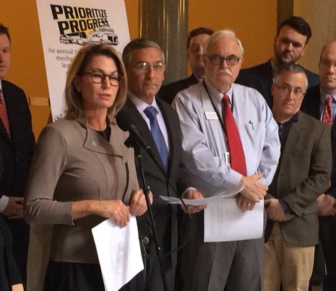 “Our plan will reprioritize state spending to put the focus on transportation,” said Senate Minority Leader Len Fasano, R-North Haven. “We are proposing a way to live within our means and simultaneously advance Connecticut for the future.”

Connecticut currently designates about $600 million per year in state financing for transportation. The debt on that financing is paid through the Special Transportation Fund, which receives the bulk of fuel tax receipts.

The GOP plan would complement that by dedicating about $450 million per year in financing to be paid off with receipts from the general fund. That fund, which covers the bulk of state operating costs, receives receipts from most state taxes, including income, sales and corporation levies.

That general fund-backed financing for transportation would begin to climb steadily starting in 2021, when it would top $511 million, and then peak at $708 million in 2025.

It is uncertain whether federal transportation assistance to states will remain constant in the future, given growing pressures on the federal budget. But Fasano noted that Connecticut currently enjoys reimbursement rates of about 80 percent for many projects.

To reserve more financing for transportation without increasing overall state debt, Republicans would remove much of Malloy’s discretion to use Connecticut’s credit card.

Programs such as the Urban Act and the Manufacturing Assistance Act give the governor broad discretion to use financing to provide business and economic development assistance.

The Republican plan also would mean curtailing financing for most of the pet projects in lawmakers’ districts, a practice critics often call “pork-barrel spending.”

“You’ve got to prioritize,” Fasano said. “Transportation is a high priority.”

Still, it is unclear whether the GOP proposal would be sufficient to meet all of the state’s needs.

The Department of Transportation right now lists almost $12 billion worth of major, long-term “unfundable” projects – such as extending Route 11 to the southeastern shoreline or replacing the elevated section of I-84 in Hartford. In other words, the projects are important, but DOT officials don’t know where to find money for the work. And that doesn’t include a dozen other projects to which the department has assigned no cost estimate.

Some members of the former Transportation Strategy Board, a state transportation planning panel disbanded by Malloy and the legislature in 2011, have estimated the immediate investment need probably exceeds $20 billion.

So is $37.4 billion over the next three decades sufficient?

“We are glad the Republicans are following the governor’s lead in participating in a bipartisan dialogue about the future of our transportation system,” Malloy spokesman Devon Puglia said. “The Republican documents, however, don’t include projects they would support or prioritize, while proposing funding levels (that) will likely only fund the status quo. The governor believes we need a transformative transportation plan – one that includes projects, prioritized by experts – and he looks forward to submitting those ideas to the General Assembly when he presents his budget next week.”

House Minority Leader Themis Klarides, R-Derby, characterized the Republican plan as “a solid, responsible way to approach this,” adding it would be “arrogant” to assume the answer lies with raising taxes. “We all know the reality we are dealing with. We only have a limited amount of money to spend.”

The legislature’s nonpartisan Office of Fiscal Analysis is projecting major deficits, topping $1.3 billion and $1.4 billion respectively, in the next two fiscal years.

Malloy, who not only pledged during last fall’s campaign not to raise taxes, but also proposed new tax breaks for students and for urban businesses, is expected to recommend a much larger transportation investment.

“I think he hinted a little bit that it is going to be on a grandiose scale,” Klarides said. “… But he’s saying you guys figure out how to fund it.”