While the number of those in our state’s prisons is down compared to prior years, there are still over 16,300 individuals in Department of Corrections’ custody, and many of those individuals will be re-entering into our communities in the coming decade.

In the Gov. Dannel P. Malloy’s “Second Chance Society” criminal justice reforms proposed Feb. 3, he identified five areas the reforms will address including the expansion of a pilot employment program for ex-offenders.

While some might say, “that’s a nice thing to do” in giving individuals a second chance to be a productive member of society, at Capital Workforce Partners, we believe it is also an economic imperative.

Former offenders reintegrating into society need a job to be successful.  And frankly, we need this population to fill impending shortages in many occupations as Connecticut’s workforce is the seventh oldest in the country. That’s why the “Second Chance Society” is an economic imperative.  Not only do we want to transition those who are a drain on our tax revenue and reliant on public safety nets to become productive, tax-paying citizens, our businesses actually “need” them.

A 2013 Forbes article, America’s Skilled Trades Dilemma: Shortages Loom As Most-In-Demand Group Of Workers Ages stated that the hardest segment of the workforce for employers to staff with skilled talent, over the last three years hasn’t been nurses or engineers. It’s been the skilled trades – the welders, electricians, machinists, etc. that are so prevalent in manufacturing and construction.  The Forbes article also stated that in 2012, Connecticut was the number one state in the nation with the biggest looming skilled trade labor shortage.

The following chart identifies a selection of “skilled trade” occupations in high demand in the state and the age of their current workers. 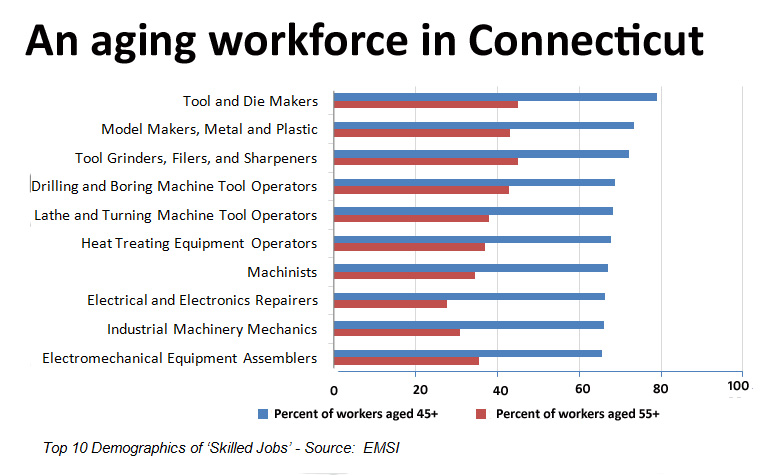 These and other related occupations can be an ideal fit for individuals returning to the community.  While the majority of prison inmates do not have a high school diploma /GED or the soft skills they need to be successful in these fields right away, that’s where the governor’s plan to broaden an existing pilot comes in.

Integrated Basic Education and Skills Training — otherwise known as I-Best — is an evidence based model that provides vocational and trades-related, work-based skills at the same time as providing adult basic education.

The Capital Region Adult Literacy Council, now known as Move UP! developed an approach to looking at the returns to individuals and to society from investments in contextualized literacy programs like I-BEST.  Their findings not only showed a significant benefit to participants, it also saw tremendous return on investment as a result of new revenues and cost savings for the public. In fact, this initiative pays for itself, and more over time.

It was a very good outcome, especially considering the challenges this population is facing.  Further, this model has been adopted by the Connecticut Education and Training Commission as a high quality blending of adult education and workplace, work-based training.

The people of Connecticut need this “Second Chance Society” initiative to succeed. And more businesses need to open their doors to consider hiring former offenders, many who made a small mistake in that past costing them their future.

With the governor’s proposed automatic post-prison employment program that uses I-BEST to transition ex-offenders meaningfully, and sustainably back to the workforce, not only will we be helping these families, we will be helping businesses meet their hiring needs. We will be reducing the burden of the high costs associated the cost of incarceration, and we should see a boost in the state’s economy.

Sheldon Bustow is board chairman of the Capital Workforce Partners  and  director of new business development at the Hospital for Special Care .