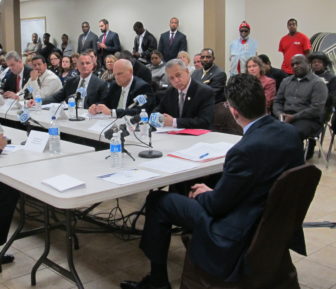 James Rovella was a Hartford homicide cop in the early 1990s, when Iran Nazario ran with Los Solidos, a gang quick to defend its drug turf with drive-by shootings. Rovella left the streets for management, eventually becoming chief. Nazario went to prison.

On Wednesday, they both sat on the same side of a long table with Mayor Pedro Segarra, top officials from the labor and correction departments, ministers and social workers, listening to Gov. Dannel P. Malloy talking about a second-term priority: creating a “second-chance society,” where ex-offenders can shed their past.

“I’ll be quick,” Nazario said, when his turn came to say a few words, tersely referring to himself as someone who got a second chance. “I see this as a groundbreaking moment.”

The men and women seated at the table, as well as those in the audience of Hartford Communities That Care, a community center in the city’s struggling Northeast neighborhood, say they want to believe Malloy actually can deliver.

Malloy, a former prosecutor, essentially called the war on drugs a failure Tuesday in a speech at Yale, repudiating that state’s reliance on mandatory sentences, especially for simple possession. On Wednesday, he announced the expansion of a pilot employment program for ex-offenders.

“The time is right. The governor is taking the bull by the horns,” said Rep. Edwin Vargas, D-Hartford, a retired educator pushing a bill that would expunge the records of offenders who do their time, complete their parole and stay clean for five years. “I think the governor with his second-chance initiative has really set the stage for the debate.”

Malloy promised more help is coming — more resources, better coordination and, if he can persuade the legislature, an easier path to pardons that will wipe clean criminal records. His audience applauded, even as one man warned Malloy that he was on a long road.

The governor talked about “breaking down silos” by partnering the Department of Correction with the Department of Labor to provide intensive training to ex-offenders and then match them to employers. Scott Semple, the prisons chief, said the initiative was a priority.

“It’s an exciting time,” Rovella said later, after the governor left. “There is a lot going on here. The only thing I worry about is the money. It’s not cheap. It’s not cheap.”

Neither, of course, is prison. Malloy says Connecticut spends about $45,000 a year on each of the 16,000 men and women incarcerated in the state. 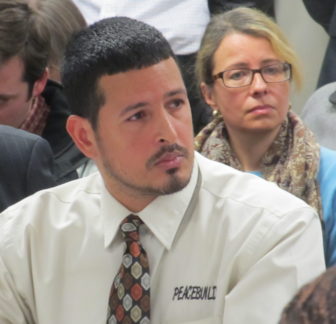 Susan Gunderman, who works with ex-offenders as a job placement coordinator at Quinebaug Valley Community College in rural eastern Connecticut, applauded the governor. But she hopes he can nudge legislators to dial back punishment and invest in rehabilitation.

She’d love to see Malloy push corporations that now routinely exclude anyone with a record from even getting an interview. Target, she said, is one of the few exceptions. She wondered aloud after the governor left if he could open a few more corporate doors.

“It’s the mom and pops that will talk to us,” Gunderman said.

Malloy’s deputy labor commissioner, Dennis Murphy, sat next to Nazario. He talked about “return on investment,” saying the new approach makes fiscal sense. All Nazario knew was that a governor was talking about his issues and the young men he now counsels.

“I’ve never seen this kind of momentum,” Nazario said. “I’m excited to be part of it in any way I can.”

Nazario, who has a faint scar over one eye, served 18 months in federal prison after admitting he helped one gang member flee after a murder and another after the firebombing of a prison clerk’s home. He says he already had a turned a corner before he went away at age 26 in 1997, working for the University of Connecticut’s Institute for Violence Reduction.

At his sentencing, his work was mocked as a cover by a prosecutor, who called his employer the “Institute for Sentence Reduction.” But Nazario stayed in touch through letters with the teens he had been counseling. When he got out, he continued the work, funded by a series of short-term contracts.

“I’m a convicted felon, so folks would say, ‘We’ll give you this little bit,’ ” he said. “I had to go through the stages of proving I was trustworthy again.”

Eighteen years later, Nazario still is working with kids. The doubts about him are pretty much gone. He is the program director of Peacebuilders, an anti-violence program that often puts him on street corners, trying to defuse neighborhood beefs.

His daughter, who was 3 when he went to a prison in New Jersey, is 21, a third-year college student studying social work. He smiled and said she wants to work with kids, then shook his head recalling how gang life repeatedly intruded on home life when he was young father.

“I got chased in my car when she was in it. Our windows were shot out when she was in her crib at home,” Nazario said. “I arrived at my house beaten up, and after I had beaten somebody up. All that craziness.”

Rovella smiled when asked what he thought about seeing Nazario, who was known on the streets as “Smurf” in his gang days, as a middle-aged “peacebuilder,” sitting with the governor and mayor — not to mention a police chief who used to investigate gang murders.

“Maturity? When does maturity kick in for our city kids?” Rovella asked.

The chief, who says he investigated 100 murders and participated in the investigations of 300 others, said he is a believer in second chances.