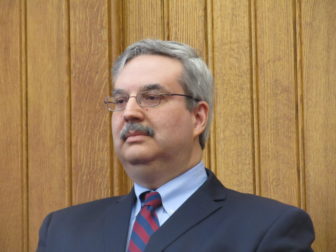 Jorge Perez, the governor’s choice to oversee the banking industry in Connecticut, would bring a background in community banking, neighborhood activism and urban politics to the state Department of Banking.

Perez, 52, the president of the New Haven Board of Alders, was introduced Friday by Gov. Dannel P. Malloy as his nominee for commissioner, subject to confirmation by General Assembly. He will resign his post as an alder.

“I am humbled,” Perez said.

He began his career in the mailroom at First Union Bank, eventually rising to his current job as vice president and senior commercial loan officer at Liberty Bank, a regional bank based in Middletown that entered the New Haven market through the acquisition of the Bank of Southern Connecticut.

Perez has worked in many aspects of banking, serving as a branch manager and department manager at Bank of Boston-Connecticut before shifting into commercial lending.

He is a native of Cuba who came to the U.S. as a child, eventually settling with his family in the Hill section of New Haven, where he still lives. Perez attended public schools in New Haven and has a degree in accounting from the University of New Haven.

Malloy, Senate President Pro Tem Martin M. Looney, D-New Haven, and Perez all said he would bring a different perspective to the job — without precisely saying what difference it would make.

Perez, who has been an adviser to non-profits in New Haven as well as an elected official since 1987, says he has ideas that he wants to first share with Malloy. As commissioner, Perez would be primarily responsible for overseeing the financial soundness of state-chartered banks and credit unions.

“I think he will bring to it a new perspective, someone from the city, someone who understands the aspirations of people who are struggling, for small businesses, for others who are searching for lines of credit with a dream and an idea,” Looney said.

Malloy praised Perez’s predecessor, Howard Pitkin, for working aggressively with Attorney General George Jepsen to protect the rights of consumers facing foreclosures. He said he expected Perez to continue that work at the Banking Department.

The governor downplayed the political dimensions of nominating a prominent Latino from the city that produced the most votes for his close election in 2010 and re-election in 2014. Until the recent appointment of former Sen. Andres Ayala of Bridgeport as commissioner of motor vehicles, the Malloy administration had no Latinos in the top ranks of government.

“These aren’t plums,” Malloy said. “These are jobs given to people based on merit.”