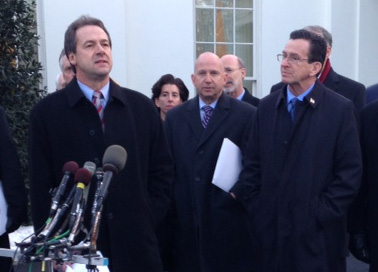 Washington – At the National Governor’s Association meeting this weekend, Gov. Dannel Malloy looked out for Connecticut’s interests, including transportation needs and environmental concerns, and began to lay the groundwork for the very political job he will hold in an important election year.

Malloy will the chairman of the Democratic Governors Association in 2016, a year his party hopes to reverse its slide among voters. Montana Gov. Steve Bullock is the DGA leader now.

Malloy is already raising money for the DGA. He said he “talked to some folks at receptions” in Washington this weekend about making donations.

“I am already participating in the elections,” Malloy said.

He’s also gone on the political offensive. Time magazine has called Malloy “the next liberal bulldog.” After a meeting at the White House Friday, Malloy condemned  former New York Mayor Rudolph Giuliani for saying, “I do not believe that the president loves America.”

“No one in his right mind could question that the president loves America,” Malloy said, and criticized potential GOP presidential candidates for failing to denounce Giuliani, saying their silence “speaks volumes.”

“When Democrats run as Republicans, we lose,” he said.

Malloy was selected by President Obama to serve as Democratic co-chair of the Council of Governors, a 10-member panel of governors who address matters pertaining to the National Guard, homeland defense and defense support to civil authorities.

As co-leader of the council, Malloy came to Washington before the NGA meeting began to discuss National Guard funding and the Pentagon’s plans to strip the National Guard of its Apache helicopters, a move the governors oppose.

Malloy was also named chairman of the Coalition of Northeastern Governors this weekend. The group works jointly on regional issues.

He also met with Obama and Vice President Joe Biden several times during his stay in Washington.

He said the issue of transportation came up during these meetings. Connecticut Transportation Commissioner James Redecker has said it’s unlikely the federal government will be a source of new revenues to help pay for Malloy’s proposed 30-year, $100 billion transportation overhaul. The state budget assumes level federal funding.

Yet the governor is optimistic there will be more money from Washington.

Partisan differences have stalled approval of a way to replenish the federal transportation trust fund, which pays for a lion’s share of state transportation funding. The trust fund is scheduled to be depleted in May; and if not refilled, federal funding to states for transportation will be cut by half, or more.

“There’s an expectation that at least a temporary solution can be reached,” Malloy said. “The broader thing is, can we get to a solution that increased the funding?”

Obama has proposed a one-time 14 percent tax on a corporate profits earned overseas to shore up the transportation trust fund, which is filled largely by gasoline taxes and has been a victim of more fuel-efficient cars and a reduction in the miles Americans are driving.

Malloy praised McCarthy, a Bostonian. “As they say in Boston, she’s wicked smart,” the governor said.

But he also prodded McCarthy to finalize regulations that would prevent air pollution that’s transported to Connecticut mainly from the Midwest.

“It all comes to my neighborhood,” Malloy said. “Keep Fairfield County and the rest of Connecticut in mind when you seek a solution.”

McCarthy said the EPA was working on a solution, but also suggested the governors try to forge an agreement among themselves on the issue of pollution and “downwind states and upwind states.”

Second chance to get it right?

A leader in Democratic initiatives like implementation of the Affordable Care Act and raising the minimum wage, Malloy often gets singled out by Obama during events in Washington like the NGA gathering.

On Friday, the president praised Connecticut for its sick leave policy.

At another meeting with the governors on Monday, the president once again gave a shout out to Connecticut, but called Malloy by the name of a former Maryland governor, Martin O’Malley.