Secretary of the State Merrill: CT must overhaul elections system 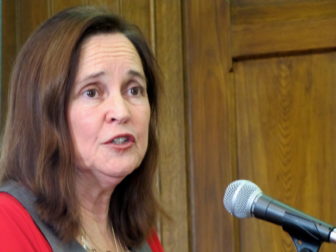 A countdown began Wednesday toward a debate over scrapping Connecticut’s unique system of relying on locally elected registrars of voters, one for each major party, to carry out elections in all 169 cities and towns.

Secretary of the State Denise Merrill outlined legislation that would replace the Republican and Democratic registrars with a single, non-partisan official appointed by the local governing authority.

Leaders of the legislature’s Government Administration and Elections Committee agree that it’s time to examine a system with few standards and little accountability. But one co-chair, Sen. Steve Cassano, D-Manchester, warned that change would take time.

“It’s going to take a period of time where the registrars, the clerks, the chief elected officials need to come together and come up with a program,” Cassano said. “There’s too many inefficiencies built into the system right now. There’s duplication. There isn’t supervision where it needs to be.”

Merrill’s office oversees elections, but it has little control over how they are run, even in cases of obvious misfeasance, such as the failure by Bridgeport registrars to order enough ballots in 2010 or mistakes that delayed voting in Hartford in 2014.

“Just this November, voters were disenfranchised in Hartford, Fairfield, Naugatuck and several other cities and towns, large and small, due to preventable mistakes,” Merrill said. “This is definitely not just about Hartford.”

Merrill and Gov. Dannel P. Malloy were among the early-morning voters in Hartford who discovered that elections officials at their polling place did not have voting lists necessary to check off voters in November.

Hartford’s three registrars – the Working Families Party has qualified in the city as a major party – complained they had insufficient staff and resources to prepare the lists, yet failed to notify the City Council or secretary of the state’s office they were unprepared.

“Enough is enough,” Merrill said. “All of this comes from a statewide elections administration system that is too political, too expensive and lacks minimal standards of professionalism and accountability.”

Melissa Russell, the president of the Registrars of Voters Association of Connecticut, issued a statement promising to work on reforms, while defending a unique aspect of the state’s system: Democratic and Republican registrars.

“We are committed to fair and open elections, and it is vital that we preserve the two-party elected registrar system in order to maintain the checks and balances and ‘two sets of eyes’ on every step of the election process,” she said.

Merrill said elected registrars are difficult to remove, even after a scandal. Santa Ayala remains the Democratic registrar in Bridgeport despite the State Elections Enforcement Commission’s conclusion that she turned a blind eye toward election fraud by her daughter, former Rep. Christina Ayala.

“Where there are problems, there is little the state or municipalities can do to hold people accountable,” Merrill said.

Merrill would establish minimum qualifications and annual training and certification for registrars.

Rep. Ed Jutila, D-East Lyme, the other co-chair of the Government Administration and Elections Committee, said the panel would conduct a public hearing on Merrill’s proposal.

Luther Weeks, a spokesman for a private oversight group, Connecticut Citizen Election Audit, said he would like to see even more sweeping reforms: Elections run on a regional basis.

His group released a survey Wednesday that gave a damning view of the election information provided on municipal web sites: