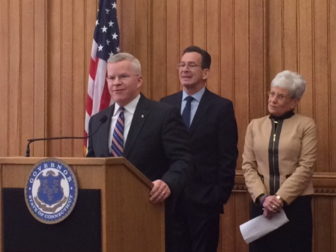 Connolly, 40, of Hebron, the global ethics and compliance officer for Pratt & Whitney Aircraft, was introduced Thursday by Gov. Dannel P. Malloy as his choice to lead the Department of Veterans’ Affairs.

“What a tremendous opportunity to serve the veterans of the great state of Connecticut and their families,” Connolly said.

If confirmed by the General Assembly, Connolly will be responsible for overseeing the Veterans’ Home in Rocky Hill and other state services for 270,000 veterans in the state.

“Working together, we can and we will build a world-class veterans program for the great veterans of Connecticut, so we do not leave any veterans, any veteran comrades behind,” he said.

Connolly also is a lieutenant colonel in the U.S. Army Reserve, assigned to the 655th Regional Support Group at Westover Air Reserve Base in Massachusetts. He said he sought the job.

“Those public service strings the governor talked about have pulled on my heart, particularly for this mission,” he said. “How can you not be passionate about our veterans, those who have selflessly served our state and nation.”

Connolly was joined at the announcement by his wife, Carol A. Connolly, also an attorney, their two young sons, Sean and Brendan, and representatives of several veterans’ organizations.

William Rudis, the Democratic town chairman of Hebron and a long-time official of the International Association of Machinists, said Connolly grew up in East Hartford and settled in Hebron after his military discharge.

Connolly would succeed Linda Schwartz, who resigned last fall to accept an appointment by President Obama in the U.S. Department of Veterans Affairs. Deputy Commissioner Joseph Perkins has been acting commissioner.

Connolly was a prosecutor and brigade legal advisor with the 101st Airborne Division at Fort Campbell, Ky., and in Kuwait and Iraq. He also served in the Office of the Secretary of Defense.