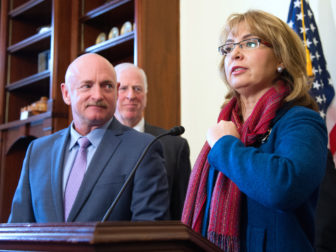 Former U.S. Rep. Gabrielle Giffords of Arizona and her husband, former astronaut Mark Kelly, at a press conference Wednesday marking re-introduction of a bill calling for expanded background checks for gun buyers. Behind Kelly  is Rep. Mike Thompson, D-Calif., one of the bill’s sponsors.

Washington – Although they’ve been rebuffed by their colleagues before, a group of determined House lawmakers on Wednesday re-introduced legislation that would broaden FBI background checks of gun buyers.

Prompted by the mass slayings at Sandy Hook Elementary School in Newtown, the legislation failed in the last Congress.

Supporters could not secure the 60 votes needed to overcome a filibuster in the Senate, and the bill was ignored by Republican House leaders.

But at a press conference Wednesday supporters of the legislation said the bill can win enough congressional support if GOP leaders allow votes on it. They said the bill does not restrict gun rights, has the support of the American public and would save lives.

The bill would extend FBI background checks of gun purchasers, now conducted by licensed gun dealers but not on sales at gun shows or over the internet. Using data collected from the states and other sources, the FBI identifies felons, domestic abusers and the mentally ill, all of whom are not allowed under the law to own a gun.

Gabrielle Giffords, a former congresswoman from Tucson, Ariz., who was shot in the head and seriously injured by a gunman at an Arizona supermarket four years ago, spoke in favor of the bill.

She said existing background checks stop an average of 200 people a day who are not allowed under the law to buy a gun, “but think of those who do go through.”

Esty said that shortly after she was elected to Congress she spoke with an officer of the Bureau of Alcohol, Tobacco, Firearms and Explosives (ATF), who posed a scenario where travelers at airports are given a choice, empty their pockets and go through security scanners or just walk to a flight.

Esty said that is what is occurring with today’s background-check system, some chose to be screened by the FBI and some do not.

The National Rifle Association worked to block the background-check legislation in the last Congress. The politically powerful group says it would place an “undue burden” on small gun sellers on the internet and at gun shows, while criminals and others barred from owning guns would procure guns illegally.

The NRA includes a lawmaker’s position on the background-check bill on it’s yearly scorecard, which determines which candidates the organization will support or oppose.

The bill’s supporters characterized themselves as gun owners and hunters and say it’s a bipartisan effort because many Democrats and several Republicans have signed on as co-sponsors, including Rep. Peter King of New York.

Another Republican supporter, Rep. Robert Dold of Illinois, dismissed criticisms of the legislation. “This is a reasonable bill; it’s a bipartisan compromise,” he said. “It’s something we can all agree on.”

House Republican leaders, however, have made no commitments to allow the bill a vote, and the Senate has lost its Democratic majority, making it more difficult to find the 60 votes needed in that chamber to end a likely filibuster.