Students and others called for the state to offer financial aid for undocumented students at a rally last year outside the Board of Regents, which governs the state’s community colleges and four regional universities.

Momentum is growing in Connecticut to open the college financial aid spigot to some undocumented immigrants — the so-called “Dreamers” — who have won the support of two key allies, the governor and the leader of the state Senate.

Sen. Martin Looney, the Democratic leader of the state Senate, is thinking bigger.

He wants to require the state’s public colleges to make undocumented students eligible for the more than $100 million they spend each year for merit- and need-based financial aid.

“The motivation behind it is recognizing that these people really are Connecticut students,” Looney, D-New Haven, said during an interview. “They are hard-working, aspiring students that want to secure higher education.”

But there are some concerns that allowing these students to get financial aid will strain a financial aid system that is already spread thin.

The pool of money Gov. Malloy would tap — known as the Governor’s Scholarship Program — has declined steadily to $37.4 million over the last several years. Last school year, 11,328 students received on average a $2,256 scholarship from this program. More than 20,000 students who were eligible did not receive a scholarship, reports the legislature’s non-partisan Office of Fiscal Analysis.

In the state’s largest public college system — which includes the dozen community colleges and four regional Connecticut state universities — 3,879 students did not receive the aid they requested last school year.

“We support all of our students having access to financial aid; we’re simply illustrating that our financial aid dollars will be stretched that much further,” Erika Steiner, the budget chief for the Connecticut State Colleges & Universities. 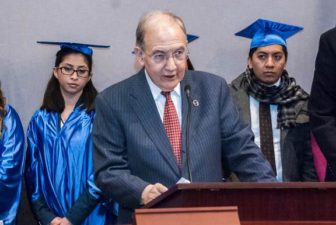 How many undocumented students?

But with tuition to attend the University of Connecticut set at $10,658 and to attend Southern Connecticut State University set at $9,157, Dreamers have held rallies at various schools across the state to highlight that they still cannot afford to enroll without financial aid.

If financial aid were made available, it’s unclear just how many undocumented students would come forward seeking it.

Such demographic information is usually derived from the FAFSA, the standard student federal aid application, but the form requires a Social Security number, which undocumented residents do not have.

“It’s very difficult to know a population that has not approached our institutions for financial aid. It’s incalculable,” said Kyle Thomas, legislative program manager for the Connecticut State Colleges & Universities.

The governor’s bill would help to gauge the demand by allowing New Haven Promise, an organization that already has experience in awarding scholarships to undocumented students, to allocate a small share of state financial aid

“Trying to determine what will be the demand, starting with this demonstration project, seems like a possible strategy to move forward,” said Patricia Melton, the executive director of New Haven Promise.

However, some legislators and college officials are worried that the funding for New Haven Promise doesn’t provide enough benefit to undocumented students, who often need the most aid since they cannot receive federally funded financial aid.

“If a student attended community college and needed full funding, that’s about $3,800 per student, so it wouldn’t go very far,” said Steiner.

The $150,000 the governor is proposing the state spend in the first year would be enough to send 38 students to community college full-time or 16 students to the regional colleges full-time for one year.

Looney’s bill takes a different approach. The state’s public colleges set aside about $100 million each year — 15 percent of the revenue they collect from tuition — for merit- and need-based financial aid for their students.

Undocumented students who pay tuition help fund those grants, but cannot receive them, Looney said. He said that needs to change.

At least six legislators agree, and have co-sponsored Looney’s bill.

Both Looney’s bill and Malloy’s would affect only students in the federal Deferred Action for Childhood Arrivals (DACA) program, which provides a renewable two-year work visa for undocumented students who do not have a criminal record.

Last month, U.S. District Judge Andrew Hanen of Texas temporarily blocked an expansion of the DACA program that would have provided amnesty for an additional five million immigrants. Twenty-six states had asked the court to review the constitutionality of President Obama’s expansion of DACA.

“The real problem going forward with Senator Looney’s bill is that it concerns DACA students, and at this point, with this in the courts, that’s going to weigh on us when we make our decision,” said State Rep. Roberta Willis, the House chairwoman of the legislature’s Higher Education Committee.

Lucas Codognolla hopes these proposals will ease the stress of paying even in-state tuition rates without financial aid.

Codognolla graduated from the University of Connecticut’s Stamford branch. To get through college he worked three jobs, attended six classes at a time and was forced to skip semesters so he could save money to continue his education.

“My story is not the majority of folks; I think I’m an outlier in that I really pushed myself to get good grades. The reality is that a lot of students in high school, because they’re ashamed of their status, they tend to drop out of school because there is this sense of hopelessness for the future,” said Codognolla, lead coordinator of CT Students for a DREAM.

The senate leader’s bill has the support of a key Republican.

Sen. Kevin Witkos, the Republican ranking member of the Higher Education Committee, said that he supported Looney’s bill because it helps undocumented students who already pay into the institutional aid system. He does not, however, support the governor’s bill.

Malloy’s budget proposal would end state financial aid for students attending private institutions in Connecticut, and Witkos said that to end that program and open a new one for undocumented student scholarships was unfair.

“We’re removing state dollars for students that go to state institutions for other students that I don’t believe should be put on a pedestal,” Witkos said “There were items in the budget that were totally defunded. How can we create new programs when we can’t even fund the programs we have in place?”

When lawmakers changed state law in 2011 to allow undocumented students who grew up in the state to pay in-state tuition, not a single Republican voted in support.

Five other states allow undocumented students to access state financial aid, according to the National Conference of State Legislatures. Those states include California, New Mexico, Minnesota, Texas and Washington.