Esty to join Obama, Bush and dozens of lawmakers in Selma 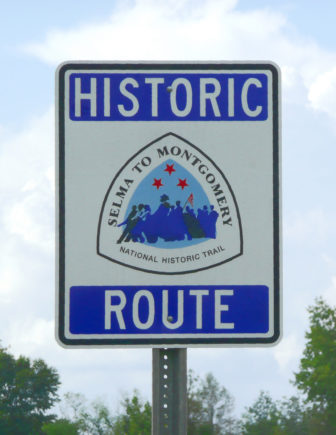 A sign marking the Selma to Montgomery National Historic Trail.

Washington – President Obama, former President George W. Bush and dozens of lawmakers, including Connecticut’s U.S. Rep. Elizabeth Esty, plan to converge on Selma, Ala., this weekend to commemorate the 50th anniversary of the historic march that led to approval of the Voting Rights Act.

The event, while widely celebrated, has also caused a partisan rift that shows the debate over voting rights is not over.

After the release of the motion picture “Selma” this year, a film that chronicled how Martin Luther King Jr. and other civil rights leaders planned and orchestrated a march to pressure former President Lyndon Johnson to back the Voting Rights Act, dozens of lawmakers said they would accompany their colleague Rep. John Lewis, D-Ga., across the Edmund Pettus Bridge this year.

Lewis was a marcher who was injured by the violence protesters faced at the hands of white police officers on March 7, 1965. For 15 years he has marked the date by re-enacting the historic crossing of the bridge. Sometimes several dozen lawmakers accompanied Lewis, but this year there will be about 100 members of Congress with Lewis — Connecticut’s Esty among them.

“I’m incredibly honored to join thousands from across the country to pay tribute to civil rights leaders like Martin Luther King, Jr., Congressman John Lewis, and countless others who fought for the fundamental right to vote and for dignity and respect under the law,” Esty said.

Alex Amend, spokesman for the Montgomery, Ala.–based Southern Poverty Law Center, said the popularity of the movie, the “nice round number” 50th anniversary of the march, and recent incidents of racial violence in Ferguson, Mo., and elsewhere have prompted the huge turnout of politicians for this year’s commemoration.

“There’s definitely been an awakening over racial injustice,” Amend said.

An awakening, perhaps, but not universal agreement..

This year’s Selma march also underscores partisan differences over the Voting Rights Act, which outlawed obstacles to voter registration and to voting and requires the Justice Department to monitor election activities in certain states and counties with a history of discrimination.

Congressional Republicans back some modifications in the Voting Rights Act and support efforts in some states to require photo identification of anyone who wants to cast a ballot. Democrats and civil rights activists like Amend, say the GOP is trying to destroy the Voting Rights Act.

“They don’t care about it,” Amend said.

Scott created controversy by saying the issue of voting rights and the commemoration of the march should be “decoupled.” 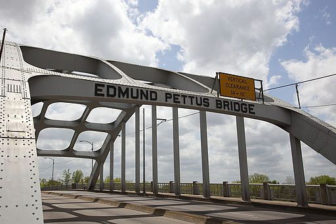 The Edmund Pettus Bridge in Selma, Ala.

Democrats are making every attempt to link the events of 50 years ago to today’s voting controversies — and racial problems in general.

“As we see some states chip away at these fundamental rights, and as we continue the ongoing conversation — and struggle — around race in this country, it’s incredibly important that we reflect on the blood, sweat, and tears sacrificed for these rights,” Esty said. “We must remember our past as we strive to do better for our children.”

Esty plans to take her 19-year-old son Jonathan on her trip to Alabama, she said. The iconic Edmund Pettus Bridge bridge — now a national symbol of civil rights — was once a symbol of white supremacy. It was named after a two-term U.S. senator and a Confederate general who was also a grand dragon of the Alabama Ku Klux Klan.