Power and prices weather the winter 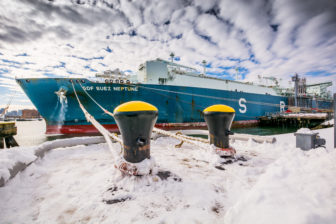 An LNG tanker making a delivery in January in Everett, Mass., north of Boston.

Along with the snow and temperatures that have fallen this relentless winter, so too have records. February was the coldest month in Connecticut since statistics have been kept. And it was the snowiest month ever in Boston.

But the winter is noteworthy for some things it has not done so far.

It has not sent prices on the New England electric grid into the stratosphere the way less sustained cold and snow did the last two winters.

It has not triggered warnings of an electricity shortage stemming from the region’s natural gas lines, which are inadequate to feed both heating systems and huge power plants.

And even more curiously, in the face of seemingly endless cold and snow, it has not set any records for power demand.

A sigh of relief?

“I feel like I never breathe a sigh of relief,” laughed Tracy Babbidge, bureau chief for energy and technology policy at the state Department of Energy and Environmental Protection. “We’re pleased we’re not seeing price volatility that was experienced last winter.”

Or the winter before, which is when things were really ugly.

As the price of natural gas has dropped in recent years, it has become the fuel of choice for power plants. But there’s not enough pipeline capacity to service both heating customers and power plants during severe cold snaps. The way natural gas contracts work, heat essentially has first dibs.

In the 2012-2013 winter, that meant some natural-gas-fired power plants could not run. A number of oil-fired power plants were caught short on fuel and some ran out. The Independent System Operator that runs the New England power grid, ISO-New England, came perilously close to a power shortage in the region. The power that was available was extremely expensive.

To prevent a repeat, ISO-New England created a Winter Reliability Program last winter designed to make sure enough non-gas fuel was available and conservation measures could be implemented quickly.

Even so, cold snaps resulted in power alerts from ISO and wholesale prices spiked to more than $400 a megawatt hour, 10 times the usual. Those prices were driven in part by the worldwide price of oil, then more than $100 a barrel.

The New England grid faced even more problems going into this winter with the shutdown of several major generators: the Vermont Yankee nuclear plant, the coal- and oil-fired Salem Harbor Station in Massachusetts, and the Mt. Tom Station coal plant, also in Massachusetts.

So ISO fine-tuned the reliability program. To make sure there would be enough oil on hand, it agreed to reimburse generators for some of the excess oil they might have after the winter, which ISO defines as Dec. 1 to Feb. 28. And to get natural gas generators to supplement their supply with liquefied natural gas (LNG) as a hedge against pipeline capacity problems, it offered reimbursements for that as well.

What ISO didn’t count on were two beneficial developments: a plunge in the world oil price to less than half of what it was last year, and an increase in the supply of LNG that drove its price lower.

The result so far has been a winter that is electricity trouble-free with per megawatt-hour wholesale prices less than half of what they were last year despite record extended cold and snowfalls.

“There are incremental things that are happening that are relieving some of the pressure and some of the volatility,” Babbidge said.

What Babbidge, ISO and others point to as the big game-changer this winter is LNG. The company GDF Suez alone has brought in twice as much LNG this January and February as in those months last year, and another company has augmented the supply for the first time in several years.

The LNG has been injected into the gas system in the Boston area for use in that immediate region. That’s lowered the burden on the rest of the pipeline system, which usually moves gas from west to east across New England.

Another factor that has kept demand for gas from overwhelming the supply is the oil price. In opting for the lowest prices, ISO said at times it has gone with oil because it was cheaper than gas.

“That may be pushing out some of the natural gas generators,” said ISO spokeswoman Lacey Griard. “It’s just the pure economics.”

That poses some environmental concern, said Babbidge, adding that DEEP would be keeping an eye on greenhouse gas emissions related to the various fuels.

In 2014, the fuel mix used in the New England grid was about 40 percent natural gas, 34 percent nuclear, 4.7 percent coal, less than one percent oil. There are also plants that can switch between oil and gas, but ISO can’t tell which is in use.

During the coldest days recently, coal and oil together provided about 30 percent of generation, while gas dropped considerably. Nuclear has tended to run just under 30 percent since Vermont Yankee shut down late last year.

Hydro and renewables each ran around 8 percent last year. That hydro does not include imported hydro from Canada, however. That is calculated separately.

Renewables and hydro have been running slightly below average lately, though it’s not clear if that’s caused by extreme winter weather freezing hydro sources.

One of Connecticut’s grid-scale solar installations – a five-megawatt facility in Somers owned by Dominion — has stayed online all winter. But, said Kevin Hennessy, Dominion’s director of federal, state and local affairs for New England, “A couple of days we didn’t generate electricity because it was snowing all day.”

The tracking system, which allows the ground-mounted panels to rotate with the sun, had to be shut down at times because the snow under them was too deep, he said.

One situation this winter that has surprised and even mystified officials, is the low demand for energy considering the brutal weather. The winter peak power demand record was set on Jan. 15, 2004, at 22,818 megawatts. (Summer peak demand is higher, and the record for that is 28,130 megawatts on Aug. 6, 2006.)

The February data is not official yet, but right now it looks like the peak power demand day this year came on Jan. 8 at 20,556 megawatts.

There are a number of theories, including overall energy efficiency. “Those efficiency investments are zeroing out the growth,” Babbidge said. “It’s an important strategy for the state.”

Other possibilities include a greater use of so-called distributed generation – individual renewable and clean energy systems for homes and businesses, including fuel cells and solar installations. Many of those solar panels would have spent a good deal of the winter covered in snow, however.

Others suggest pure luck with timing – that some of the worst weather occurred on weekends when demand is lower. And others offer the theory that the weather was so bad at times that businesses shut down for several days, lowering demand. And there were some power outages in the region.

Whatever the reason for the low demand – and ISO is looking into it – it will come with a caution.

“One winter’s experience is not indicative of what happens in another winter,” said Marcia Blomberg, another ISO spokeswoman.

DEEP’s Babbidge agreed. “Market dynamics, markets, can change where we have a series of factors that come together,” she said. “In this case, so far this winter, it’s been beneficial. Markets change — and then you end up with a scarcity.”