In controversial health care bills, some agreement on transparency

Jean Rexford likes to point out that when she buys a car, she knows the cost, the quality and what to do if something goes wrong.

“There’s nothing in health care, where I’m spending a lot more money, that I can do that,” said Rexford, executive director of the Connecticut Center for Patient Safety.

In fact, Connecticut earned F grades on two recent national scorecards that ranked states by the availability of information on health care price and quality for consumers.

This year, some top legislators have their sights set on addressing what they see as troubling changes in the state’s health care landscape. Senate President Pro Tem Martin M. Looney and Minority Leader Len Fasano teamed up to develop a series of proposals focused on the growth of large hospital systems, hospitals’ acquisitions of physician practices, and what the two lawmakers warn are the increased costs that result from both. The proposals have been criticized by hospital officials and some others in health care, and are likely to undergo changes before a final version emerges.

But there’s a less controversial thread in some of their proposals, one that has backing, at least in concept, from health care industry groups that don’t always agree: increasing transparency about health care costs.

As Rexford noted, the basic tools most people are used to having when shopping are still largely unavailable or underused in health care. It can be difficult for patients to find out in advance what medical care will cost, or to compare price and quality options when picking a doctor or a facility to have a test done.

And yet, many people have insurance plans that increasingly require them to pay a larger share of their medical expenses.

“We cannot vest consumers with these responsibilities without being fully committed to providing them with all the information they need,” the Connecticut Association of Health Plans said in written testimony on the proposals.

Some say simply making information about costs and quality publicly available can help keep prices down or lead patients to pick lower-cost providers.

“Price transparency is a powerful tool for cost containment,” Fasano, R-North Haven, told members of the Public Health Committee Wednesday. “Just shine the light…We can do it very easily.”

But others note that there are limits to what transparency alone can accomplish.

“Transparency aimed at changing individual health care decisions alone does not ensure a better experience for the consumer, or better health outcomes,” the Universal Health Care Foundation of Connecticut said in written testimony, noting that it’s unlikely most people will comparison shop for most of the care they receive. “It is only one piece of a much larger health care system puzzle.”

One proposal by Looney and Fasano calls for insurance companies to establish toll-free numbers and websites that customers could use to find out what they would have to pay for specific medical services. Health care providers would be required to provide information on their charges in advance to patients who request it.

Information about cost and quality would also be available through a website operated by the state’s health insurance exchange. And hospitals would be required to join an organization that provides safety rankings.

A separate bill would prohibit certain facility fees – which patients are sometimes charged when receiving outpatient services at hospital-owned facilities – and cap other facility fees and require insurers to cover them.

Another proposal by the Senate leaders would create an independent state agency – modeled after one in Massachusetts – to monitor and report on health care cost and delivery trends, identify providers with particularly high cost growth, and review the impact of health care market changes, including proposed mergers and acquisitions. The proposal doesn’t specify how the agency would be funded – a major consideration in a tight budget year – but Fasano said it could be paid for by an assessment on health insurers.

Looney and Fasano have also proposed creating a special commission to study variation in the prices health care providers charge for the same services and recommend ways to reduce variation that isn’t justified by differences in cost or quality.

Figuring out the details

“This is my Christmas,” Rexford said while waiting to testify on the proposals Wednesday.

Several health care provider groups said they supported the concepts behind the measures, although they raised concerns about some of the specifics. 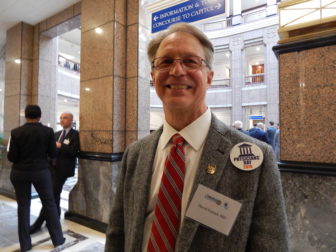 But, he said, it wouldn’t make sense to require physicians to give patients their fee schedules, since they won’t reflect the patients’ costs. Each insurer pays doctors a negotiated rate, and each patient’s out-of-pocket costs vary based on both their insurance company and whether their plan includes copays, a deductible or other forms of cost-sharing.

For the same reasons, it can take hours for the Yale Medical Group to come up with a reliable price estimate for a patient who requests one, Dr. Paul Taheri, the group’s CEO, said in written testimony.

Other doctors suggested that it would make more sense for insurance companies to be the ones to provide price information.

Keith Stover, a lobbyist for the Connecticut Association of Health Plans, indicated that insurance companies would be open to taking on a larger role in providing cost information.

“I think you have a payer community that is more willing than it ever has been to do innovative things,” he said. As evidence, Stover noted that every insurer is developing its own tool for customers to find price information.

Taheri, the Yale Medical Group CEO, also suggested that quality measures that are made available to the public should account for variation in the health conditions of patients. He noted that his practices tend to see “the sickest patients with the most difficult-to-treat conditions.”

And Francois de Brantes, the head of the organization that gave Connecticut the F rankings for health care price and quality transparency, said the proposals could use some improvement. As written, he said in testimony, they probably wouldn’t raise the state’s grade much above a C.

“There are a significant number of conditions, illnesses and procedures for which there are no quality measures, and I would urge this committee to make that transparent to consumers as well,” he said. “In other words, let’s stop pretending that we can measure the quality of care when we can’t, and let’s explain, transparently, to consumers why we can’t.”

And de Brantes suggested that the state require publication of the full expected costs for entire episodes of medical care, rather than individual services.

“When consumers have an illness, injury or condition that requires multiple services from different providers, piecing together the total price – and their out-of-pocket costs – for that episode is virtually impossible, and we don’t ask consumers to do that for any other important expense in their lives,” he said.