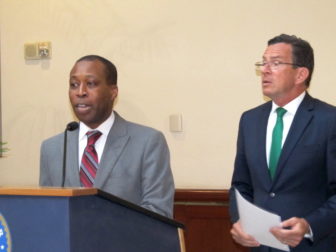 Jackson, who will resign as mayor on April 16, will become the Office of Policy and Management’s undersecretary for Intergovernmental Policy. In that post, Jackson also will oversee various state funds invested in municipal and regional improvement programs.

“The health and vibrancy of our urban centers are critical to the overall well being of our state and the regions that surround them,” the governor said.

Whether we’re talking about housing needs, economic development strategies, education concerns, transit-oriented development investments, or criminal justice issues, these issue areas are frequently interconnected and need to be cohesively strategized for maximum effectiveness,” Malloy said.  “Scott Jackson has years of experience handling many of these issues in a number of positions with the Town of Hamden and will serve as an effective advocate for the state to ensure that we are unified in our approach to these policies.”

Jackson, who has been mayor since 2009, said that while that has been enormously gratifying, “the opportunity to join a statewide team like the one assembled at OPM is a truly exceptional opportunity. The challenges we face as a state are serious, but not insurmountable.

Jackson attended Cornell University, where he majored in government, and was also awarded a Mellon Foundation Fellowship to study demographic trends in municipal government at Yale University.