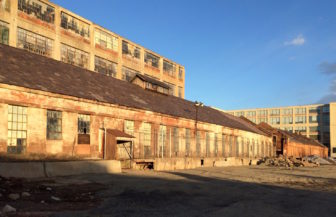 Two long, one-story buildings in the Colt complex, known as the Forge, left, and the Foundry, right, date to the 1850s and may be turned over to the National Park Service.

The National Park Service has designated James Woolsey, superintendent of the Springfield Armory National Historic Site, to transform Coltsville into a place where thousands of tourists can learn about the history of Sam and Elizabeth Colt, the famed Colt firearms, and the creative manufacturing processes they introduced.

The Obama administration has asked Congress to appropriate $180,000 to begin work on the park, not that much money, but “typical for a start,” National Park Service Director Jonathan Jarvis told The Connecticut Mirror.

“It puts a couple of people on the ground,” he said.

Discussions of where the National Park Service would establish offices, a visitor’s center, displays of artifacts and exhibits that would tell Coltsville’s story have also advanced.

The park service and a private developer who has built apartments and office buildings in armories and factory buildings built by Sam and Elizabeth Colt, have identified two empty, dilapidated buildings near the blue-domed East Armory that might meet the park service’s needs.

That’s important for park supporters. In December President Obama signed a bill that would authorize the Coltsville National Historical Park, but the park has not been “established” yet, according to park service parlance. “For that we need a (property) transfer,” Jarvis said. “We don’t have any presence there until we take a portion of the site.”

A planning meeting bringing together the National Park Service and local officials and others with a stake in the project has been set for March 27 to discuss the transfer and other issues.

The legislation authorizing the park set its boundaries around the complex of 19th century factories, the Colt residence called Armsmear, the Church of the Good Shepherd, Hartford’s Colt Park, the “Potsdam” cottages that once housed workers and the James Colt House.

A major Coltsville developer is Colt Gateway. A big investor is Chevron, an energy company that became interested in Coltsville in 2003 because it was on historic registry and eligible for federal tax credits. 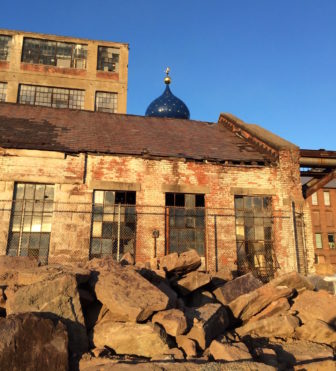 The blue onion dome of the Colt East Armory is seen above the Forge building in the Colt complex.

Lawrence Dooley of Colt Gateway said he wants the transfer of property to happen as soon as possible. He said he arranged for the March 27 meeting “in the hopes that we can move, move, move.”

The original plan called for the transfer of 10,000 square feet of space in the East Armory to the National Park Service.

But attention has shifted to two one-story buildings built in 1855 near the East Armory that are all that remains of Sam Colt’s original factories.

“They are real cool buildings,” Dooley said. “But they are going to take some expense to renovate.”

He estimates the cost to be about $3 million for each of the 9,000-square-foot buildings.

Woolsey calls Coltsville “a new model of a national park,” that would merge private, state or city properties with a federal presence, which he said will be very small in Hartford.

“We are going to own the very minimum needed to provide park services,” Woolsey said.

He said he is open to the transfer of the two old factory buildings but also wants the park service to have access to the East Armory.

He also said he hopes the state, the city of Hartford or a philanthropist will help with the renovations.

“Money (in Washington) is really tight right now,” he said. “And no matter where we are located, there will be construction costs.”

Lynn Ferrari, who is forming a “Friends of Coltsville National Historic Site,” said she didn’t think the National Park Service would be interested in restoring the old factory buildings, the only ones that remain in Coltsville that Sam Colt has walked through.

But Ferrari, who heads the Coalition to Strengthen the Sheldon/Charter Oak  Neighborhood and is a member of Hartford’s historic properties commission, thinks it’s a good idea.

“It just makes sense,” she said.

The legislation that authorized the Coltsville National Historical Park required the transfer of a minimum of 10,000 square feet to the National Park Service, but did not set a limit.

To Ferrari, the site is much more than a former munitions factory. It is a place that bred innovation in engineering and attracted the likes of Henry Ford to witness the latest in manufacturing techniques.

“We’re aware that Colt made guns, but the story is much bigger than that,” she said.

The story of gun making

Despite the progress, everyone involved in the transformation of the Coltsville neighborhood said it will take years. 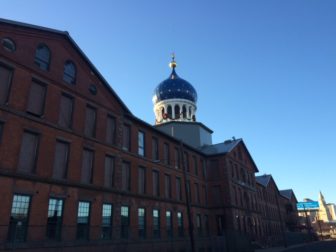 Besides the transfer of property – and its renovation – Woolsey said there needs to be an agreement with the City of Hartford, which owns Colt Park, over the role it will play in a national park. Agreements with the owners of the rest of the Coltsville complex will also be needed to establish that they will manage their properties in a way that’s consistent with the area’s new status.

Richard Colton, the historian at the Springfield Armory, visited Coltville with Woolsey about two weeks ago. He says he’s enthusiastic about what he saw.

He said the partnership between Coltsville and the Springfield Armory, a centuries-old place where the federal government made and stored munitions from the Revolutionary War to the Vietnam War, is perfect.

“We’ve been looking for something that would represent the private sector in the precision manufacturing industry,” he said.

He also said Coltsville will help the National Park Service tell the history of arms manufacturing in the Connecticut River Valley, which includes the work that once was done in the former Winchester factories in New Haven.

“This is a story that crosses state boundaries,” he said.

Meanwhile, Rep. John Larson, D-1st District, who sponsored the legislation that will turn Coltsville into a national park and has been the project’s biggest booster, is optimistic about the progress being made.

“We’ve heard nothing but good news from the park service,” he said. “They’ve hit the road running on this one.”