“I can’t afford to take them anymore,” he said.

But Gorman’s announcement drew concerns from local hospitals, other providers and the state Department of Mental Health and Addiction Services. So he agreed to wait to see how the state budget shapes up, with plans to stop taking referrals May 1 if things don’t look more promising.

The governor’s proposal would cut $25.5 million in grant funds that mental health and substance abuse treatment providers have long used to help offset the cost of caring for uninsured and underinsured patients. And providers say the cut could have dramatic and damaging effects on the mental health treatment system in the state.

“The adult mental health providers, particularly in the local mental health authorities who are responsible for the most challenging adults with serious mental illness, are all preparing for reductions of service, and/or closure of access,” said Heather Gates, president and CEO of Community Health Resources, a treatment provider. “There’s a recognition that this is a game-changer.”

The Malloy administration first proposed cutting the funding two years ago, arguing that providers wouldn’t need the grants once more people gained coverage under the federal health law and providers could bill their insurance.

On Monday, Benjamin Barnes, Malloy’s budget director, cited another reason. Few, if any, other states provide supplemental funding to mental health providers in addition to Medicaid payments, he said.

“This is, frankly, a luxury that we can’t afford right now,” Barnes said.

Providers say they won’t be able to make up the lost grant money through billing, since most newly covered clients have Medicaid, and it pays so little that they lose money for each Medicaid client they treat.

That position was recently backed up by an analysis by the Department of Mental Health and Addiction Services, which suggested that additional Medicaid billing will only offset an estimated $7.3 million of the $25.5 million cut — leaving the treatment providers $18.2 million in the red.

Outpatient treatment providers would see the largest shortfall, losing $18 million in state grants while likely bringing in only $2 million in increased Medicaid revenue to offset it, according to the department’s analysis.

If this sounds familiar, it’s because a similar thing happened last year. The state’s previous two-year budget included cuts to grant funding after the federal health law’s coverage expansion rolled out at the start of 2014. But after a DMHAS analysis last year showed that providers wouldn’t make up the lost grant funding through billing, legislators and the department cobbled together funds to maintain the grants. They used $10 million in settlement funds from tobacco companies, $10.1 million from elsewhere in DMHAS’s budget and budgeted $5.4 million to be paid through higher Medicaid rates for outpatient services.

But the $5.4 million never came through because the federal government has not yet approved the state’s request to raise the rates, leaving providers short this fiscal year.

The Malloy administration didn’t restore the grant funds in its proposal for the next two fiscal years, or continue the patched-together fix from last year. 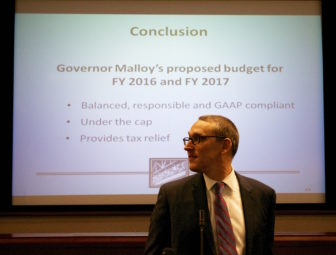 Barnes said Monday that the administration was leaving mental health providers out of a separate proposal to cut Medicaid payment rates, recognizing that “there is real pressure on those rates, and this is an area where we felt that we couldn’t afford to reduce those rates any further.”

“On the other hand,” Barnes said, “I do think that behavioral health providers may need to adapt.”

Although he said he didn’t know specifics about their expenses, Barnes said that, in general, organizations can often find efficiencies when necessary.

And he noted that the state continues to fund “enormous amounts of resources for mental health provision for the indigent.”

“I fully expect that, were our budget to be adopted, it would still leave Connecticut as one of the top five best-funded public mental health systems in the country,” Barnes said.

Legislators from both parties have indicated that they’re not happy with Malloy’s health and social service cuts, although it’s not yet clear which cuts they will try to restore and how they would balance a budget currently projected to have a $1.3 billion gap in the next fiscal year. 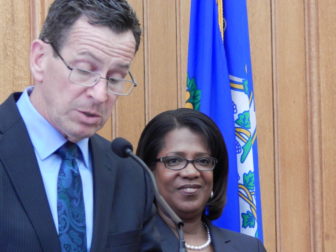 State agency officials plan to talk with treatment providers about “how to best evolve the system, given the resources we have,” DMHAS Commissioner Miriam Delphin-Rittmon said Monday. Malloy named her to the post Monday; she made the comments during the press conference in which he made the announcement, standing next to the governor.

When asked if the governor’s budget proposal gave the agency enough money to adequately serve its clients, Delphin-Rittmon said, “We believe that we do have adequate funding to continue to provide quality services to individuals who are accessing care throughout our system.”

“Because of the rotten Medicaid rates, I’m going to lose $240,000 this year serving about 1,100 people,” he said. “So I’m better off serving three or four-hundred people, laying off a psychiatrist, laying off a social worker or two, and I’ll still lose money, but I won’t lose a quarter of a million dollars, I’ll lose $100,000.”

Providers are now in the position of having to decide how much service they can afford to provide based on the size of the loss they can take, Gorman said.

“As some of us have responded to the increased demand for services, the gap between the cost of service and the Medicaid reimbursement has made things worse, not better,” Gates, of Community Health Resources, said. “So in fact, more people becoming insured has made the financial picture worse.”

Providers have complained for years of inadequate funding. But Gates said this year is different, both because of the size of the proposed cuts and because providers have already cut administrative expenses and squeezed worker pay, leaving few easy sources of savings.

“It’s a financially fragile provider system in a climate where reimbursement doesn’t pay for the cost of service of those who are on insurance, and then the government’s pulling out the one source of funds that’s kind of the glue to the whole thing,” she said, referring to the grants.

Wheeler Clinic, which stands to lose about $700,000 if the grant cut goes through, would adapt by no longer taking uninsured clients, President and CEO Susan Walkama said. About three-quarters of the Plainville agency’s 19,000 clients are covered by Medicaid.

“It’s really a very frightening scenario for the community,” she said.

Gorman said people affected by cuts to outpatient services are getting more than counseling now.

“It’s a matter of whether they can put together a budget that reflects that,” he said.

Mental health, substance abuse treatment cuts
Gov. Dannel P. Malloy’s proposed budget would eliminate $25.5 million in grants for mental health and substance abuse treatment providers. Those providers are expected to see some increased revenue from billing Medicaid for clients who gained coverage as part of the federal health law. But that won’t be enough to offset the grant cuts, according to a recent analysis by the state Department of Mental Health and Addiction Services. (“Grants pre-ACA” refers to grant funds available before the Affordable Care Act, the federal health law, which made health care coverage available to more people.)
Department of Mental Health and Addiction Services
Related Stories