New program for CT women vets would be unfunded 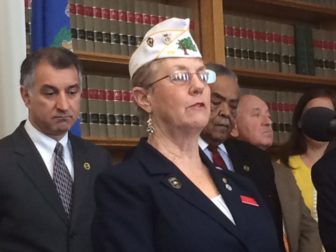 Jackie Evonsion of the American Legion says many female veterans are unaware of their eligibility for benefits.

The Senate voted unanimously Wednesday for a bill that creates an unfunded program for the 16,545 women in Connecticut who are veterans of U.S. military service.

The legislation directs the state Department of Veterans Affairs to create a program that assesses how well it serves female veterans. The department also is directed to do an outreach campaign to publicize available state and federal benefits.

But in a year of tight finances, the new program must be devised and carried out within existing resources.

With the drawdown of troop levels after the long wars in Afghanistan and Iraq, the number of returning veterans is expected to swell in Connecticut. And for the first time, those numbers will include large numbers of women.

“I think it’s really critical to analyze the services for our veterans,” said Sen. Mae Flexer, D-Killingly, the co-chair of the Veterans Affairs Committee.

In 2010, post-traumatic stress disorder, hypertension and depression were the top three diagnostic categories for women veterans. About one in five responded “yes” when screened for sexual trauma.

The bill now goes to the House.

Jackie Evonsion, the director of women’s outreach for the American Legion, said many women who served during previous conflicts were unaware they were eligible for many of the same benefits extended to male veterans.

“We have a lot of women veterans who, number one, don’t recognize themselves as veterans,” said Evonsion, who served in the Air Force during the Vietnam War.