A Connecticut prison is rededicated to sending men home 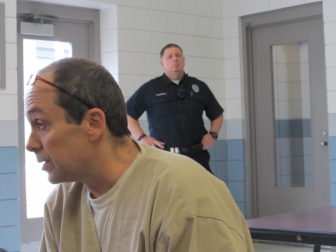 Somers — Serafettin Senel and Andrew Phillips are inmates at the Willard-Cybulski prison complex, one of Connecticut’s expensive monuments to the mistakes of men. Senel’s mistake was selling narcotics. Phillips’ was drinking and driving, repeatedly.

Like 90 percent of everyone sentenced to prison, they eventually will go home. On Tuesday, they became symbols of a new effort to prepare them for that day as Cybulski, product of a 90s prison building boom, was rededicated as the Cybulski Community Reintegration Center.

“This is a momentous occasion, because it makes a break with the past,” Gov. Dannel P. Malloy said. “From 1985 to 2008, we tripled the population in our jails. We built great prisons, even during a time when we refused to build great schools.”

With crime at a 40-year low and a falling prison population, Correction Commissioner Scott Semple is trying to further drive down recidivism by dedicating an entire facility to re-entry. Senel and Phillips are in an initial group of 110 inmates.

“Please know this is not a soft-on-crime approach. This is a smart-on-re-entry approach,” said Semple, an up-from-the-ranks administrator named commissioner in January. “We have a responsibility to prepare offenders as they near their release.”

Semple’s initiative, which required no new funding or legislative approach, dovetails with Malloy’s broader call for a “Second Chance Society.” It includes legislation ending mandatory minimum sentences for possession of narcotics, which puts the Democratic governor on the same page as some of the nation’s most conservative Republicans.

“This is a movement, a movement in Connecticut, a movement nationally in some of our most conservative states – in Texas, in Kansas, in Oklahoma, in Ohio,” Malloy said.

Semple opened the new Connecticut program about 60 days ago in Cybulski, a 600-bed minimum security prison that opened in 1993 and was consolidated in 1997 with the nearby Willard prison, just over the town line in Enfield.

On rolling farmland in the three contiguous towns of Suffield, Enfield and Somers are more than a half-dozen low-rise prisons, each surrounded by fences topped with coiled concertina wire. Most were built or expanded during the 1980s and 1990s, when a crack epidemic and tougher sentencing policies helped fuel a prison population explosion.

The federal prison population exploded from 24,000 to more than 200,000 after Congress enacted mandatory minimum sentences in 1980s, when a Democratic Congress and a Republican administration competed to be the toughest on crime. Many states followed suit.

California imposed a three-strikes law in 1994 that allowed the imposition of a life sentence on a third felony conviction, even for a non-violent crime. Two years ago, California passed Proposition 36, a referendum that narrowed the law and created a path to release for nearly 3,000 inmates serving life sentences. 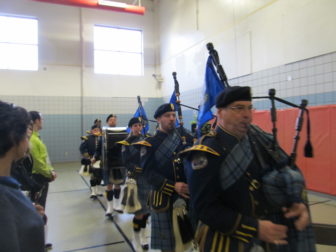 Department of Correction bagpipers and drummers opened and closed the dedication.

The change, which was estimated to save California $90 million annually, was endorsed on the left by the San Francisco Green Party and on the right by Grover Norquist, the anti-tax activist. Predictions it would lead to higher crime rates have not come to pass.

With the benefit of hindsight, Malloy said, it’s now clear that some of the reaction was an overreach that helped create generations of inmates with long odds of finding a place in society after their release.

“We go to church on Sunday because we pray for second chances. We realize the world is full of sinners, all whom can be forgiven in the eyes of their god,” Malloy said. “Yet, somehow, in some way, we lost our way. We became more engaged in building prisons and permanent punishment than we were in permanent reform. We exacted a higher and higher price for the offenses committed by an individual.”

Malloy suggested that the sprawling community of Connecticut prisons near the Massachusetts were full of men who made mistakes, but the facilities and the laws that helped fill them also were the product of bad public policy.

Senel and Phillips, two of the 110 inmates living in open cubicles in one of six dormitory units at Cybulski, hope to be among the beneficiaries of a new focus on preparing inmates to succeed upon release.

The shrinking prison population essentially gave Semple, who joined the Department of Correction in 1988, room to experiment on building a therapeutic community geared toward preparing inmates for the day they go home.

For Phillips, a 50-year-old cabinetmaker from Windsor serving three years on his third conviction for drunken driving, that day is projected to be around Aug. 25, 2016. For Senel, a Bridgeport man, that day could come early next year, if the parole board concurs.

He was sentenced for selling narcotics. He also was an addict. 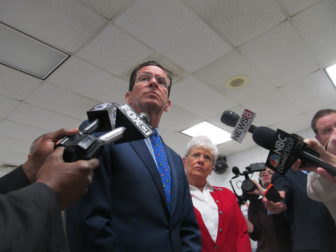 “I dunno, I was just doing the wrong thing with my life. Eventually it caught up to me, addiction. I came here, sentenced to 15 years, suspended after five,” Senel said. “And now I’m two years into my sentence.”

Home for Senel and Phillips are cubicles with bunk beds in an open dorm unit with high ceilings and cinderblock walls decorated with messages chosen by the inmates.

“Failure to plan is planning to fail.”

Before Cybulski was repurposed, Senel did kitchen work.

“That was my only real activity,” he said.

Now, nearly every waking hour is programmed. He still does three shifts in the kitchen, but in between he takes intensive classes, many geared to finding, landing and keeping jobs. He hopes for a career in HVAC.

“It is very regimented. There is structure,” Phillips said.

And it was designed with the input of inmates, who named their unit, “E.N.O.U.G.H.” That stands for “embracing new opportunities upholding good habits.”

Phillips, who once owned his own business, does not need the job-interviewing skills as much as some of the younger men with little steady work history.

But he is confronting his own failings. With a history of drunken driving, he says, he got drunk after friends threw him a going-away party, and he was arrested for the third time.

Phillips says he now rises at dawn, looking forward to a day of challenging himself and preparing to go home.

“It’s a second chance for every one involved,” he said. “I want to become a taxpayer again instead of a tax burden, which I am here.”