After one final twist, a chief justice is confirmed 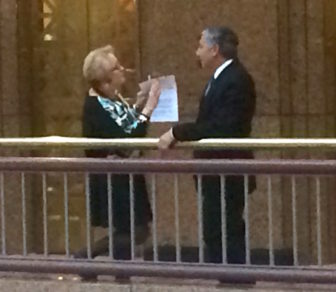 A noisy path to reconfirmation for Chief Justice Chase T. Rogers reached its end with a 139-6 House vote Wednesday, but not before a Latina legislator accused Rogers of slighting the Supreme Court’s first and only Latina justice.

Rep. Minnie Gonzalez, D-Hartford, voted against Rogers’ confirmation to a second eight-year term as chief justice of Connecticut’s highest court, citing an opinion in which the majority accused the dissenting Justice Carmen Espinosa of dishonoring the court.

“A chief justice should not condone or support such an attack,” Gonzalez said during a brief debate in the House. “She should exercise moral leadership.”

Gonzalez choosing to make an issue of intemperate language struck some in the House as odd, given that Gonzalez’ insults of a Republican colleague recently prompted a newspaper’s call for her censure and the GOP minority’s demand for an apology.

“I wasn’t sure I was hearing correctly,” said Rep. Rosa C. Rebimbas, R-Naugatuck, the ranking Republican on the legislature’s Judiciary Committee.

In an email that became public, Gonzalez described Rebimbas as “cold with no heart,” interested in cozying up to judges to ensure future work in family court as a court-appointed guardian of children in contested divorce cases.

The context was Gonzalez’ complaints that Rogers, as well as some lawyers like Rebimbas on the Judiciary Committee, are slow to act on complaints about how expensive such court-appointed guardians can be.

Gonzalez said she saw no inconsistency in accusing Rogers of tolerating intemperate language so soon after Gonzalez herself was accused of the same offense.

Gonzalez apologized to Rebimbas for circulating the email, not its content.

“That was my only regret. My only regret was I sent it to people I wasn’t supposed to,” Gonzalez said Wednesday. “But I didn’t lie about her.”

Rebimbas said, “Nothing surprises me any more.”

The email flap — and Gonzalez refusal to apologize for its content — led to Republicans filibustering consideration of about 45 bills as the Judiciary Committee reached its deadline.

No one rose to speak on the floor Wednesday after Gonzalez, who delivered the only criticism of Rogers.

The House then voted 139 to 6 to confirm the chief justice, who was appointed by Republican Gov. M. Jodi Rell and reappointed by Democratic Gov. Dannel P. Malloy. The Senate voted 35 to 0 for her confirmation last week.

Rep. Dan Carter of Bethel was the only Republican to oppose Rogers. He said he opposed her at the request of constituents unhappy with the operations of family court.

While Gonzalez’ public insult of Rebimbas was unintentional, Rogers and Espinosa traded their broadsides in a published opinion and dissent in a decision overturning the murder conviction of Richard Lapointed, a mentally impaired man.

Espinosa, a former FBI agent and federal prosecutor, wrote a dissent accusing the majority of abandoning its impartiality and damaging the rule of law in finding for Lapointe, convicted on the basis of a contested confession. The majority invented a legal rationale, she wrote.

“This sleight of hand is reminiscent of the Wizard of Oz exhorting Dorothy to ‘[p]ay no attention to that man behind the curtain!’ ” Espinosa wrote. “At that point in the movie, no child was fooled, and the majority should not even try to convince itself that the reader will be fooled by its shell game.”

The majority, including Rogers, shot back in a footnote, saying that Espinosa chose, “for reasons we cannot fathom, to dress her argument in language so derisive that it is unbefitting an opinion of this state’s highest court.”

“We will not respond in kind to Justice Espinosa’s offensive accusations; we are content, instead, to rely on the merits of our analysis of the issues presented by this appeal,” they wrote. “Unfortunately, in taking a different path, Justice Espinosa dishonors this court.”