BIA takes heat from CT lawmakers, others on Indian recognition

Washington – Kevin Washburn, the head of the Bureau of Indian Affairs, hinted Wednesday he may have eliminated a provision in new tribal recognition rules that would stymie efforts by several Connecticut tribes to seek federal status.

Connecticut state and local officials are concerned that recognition of those tribes could lead to land claims and new Indian casinos and affect a slot machine revenue-sharing agreement between the state and the Mashantucket Pequots and Mohegans, two federally recognized tribes with casinos in Connecticut.

“Ultimately, what we’ve been hearing is that the provision may be unconstitutional and even illegal,” Washburn said at a hearing on his proposal Wednesday before the Indian affairs panel of the House Natural Resources Committee.

He was referring to a provision he included in his proposed regulations that a tribe’s application be subject to the approval of those who have previously opposed their bids.

Washburn said he had included what has been called a  “third-party veto” in his proposed changes to the recognition process “to give people who fought recognition also some equity” in the process.

But he said that it proved problematic.

“The provision may be indefensible in court,” he said.

The Eastern Pequot Tribal Nation of North Stonington, the Golden Hill Paugussett Nation of Bridgeport and the Schaghticoke Tribal Nation of Kent, which have been denied recognition for years, would be given a second chance by the new rules, but would be stymied by a “third-party veto.”

But no one has seen the final regulations Washburn sent this week to the Office of Management and Budget. The OMB’s Office of Information and Regulatory Affairs has by law 90 days to finish its review of the regulations before they are implemented, but it usually takes less time.

Washburn defended his efforts Wednesday before congressional critics, including Reps. Joe Courtney, D-2nd District, and  Elizabeth Esty, D-5th District, who were invited to take part in the hearing, even though they don’t have a seat on the Natural Resources Committee.

Courtney asked if towns, including North Stonington, which has fought the efforts of the Eastern Pequot to gain recognition, would have a say in the new process.

“We have some battle-scarred…small towns,” Courtney said.

Washburn replied the BIA “will take information from wherever it comes,” and North Stonington and neighboring towns could have input into the new process.

Esty told Washburn that she had “heard from folks from the Town of Kent that is in my district that allowing previously denied tribes, as we have, a ‘second bite at the apple’ would be tremendously disruptive, with economic and quality of life implications that are really profound …” The Schaghticoke Tribal Nation has made claims, so far unsuccessfully, in the Kent area.

Sen. Richard Blumethal, D-Conn., who was invited as a witness, said Washburn’s proposed regulations, issued almost a year ago, were “unacceptable and actually illegal.” 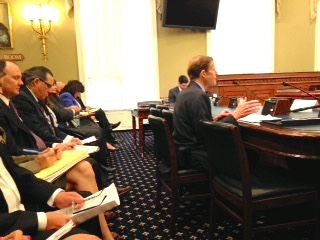 “The proposal not only lowers the bar, it eviscerates the bar and makes the rules virtually meaningless,” Blumenthal said.

Washburn said he worked hard on his proposal and took into consideration thousands of public comments — including those that were critical — before finalizing his regulations.  He said opposition to his efforts made it “clearly evident that no good deed goes unpunished.”

Rep. Don Young, R-Alaska, the chairman of the Natural Resources Committee panel on Indian affairs, is among those who oppose efforts to modify the acknowledgement rules. He invited the Connecticut lawmakers  to join the hearing because state officials have been among the most opposed to Washburn’s actions.

Last month, Young sent Interior Department Secretary Sally Jewell a letter, signed also by Courtney and Esty, urging that the BIA “refrain from issuing final regulations until we have conducted the oversight necessary.”

Young called Washburn’s submission of his final regulations to OMB “a snub of the committee’s oversight function and a snub to me personally.”

Representatives of several Indian tribes testified to oppose the changes. Robert Martin, chairman of the Morongo Band of Mission Indians of California, criticized Washburn’s proposal that a petitioning tribe could provide evidence that outsiders had considered it a tribe since 1934, instead of 1900, as the current regulations require.

Washburn said he had taken a second look at that proposal.

“I am in a hot seat, and I would invite you to sit in it,” Washburn said.

The BIA chief’s only support at the hearing came from Brian Cladoosby, president of the  National Congress of American Indians, who said the status quo “is a broken system.”

He said when the current recognition process was established in 1978, federal officials assured him the applications of 150 tribes would be considered within four years.

Since then, Cladoosby said, applications from 51 tribes have been resolved under existing regulations; 17 have been granted and 34 have been denied, while hundreds of other tribes are awaiting a decision.

But he said he was committed to changing the system.

“If there’s a legitimate tribe out there who isn’t recognized, then that’s an injustice,” Washburn said.

Correction: An earlier version of this story incorrectly said the Bureau of Indian Affairs has approved 51 applications for tribal recognition since 1978. In fact, the bureau has resolved 51 applications in that time, granting 17 and denying 34.