Price of first step on Malloy’s 30-year journey is $2.8 billion 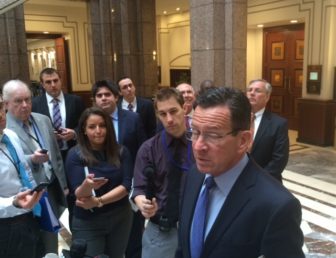 The administration of Gov. Dannel P. Malloy asked a legislative committee Monday to approve $2.8 billion in additional transportation borrowing over five years, a down payment on what Malloy hopes will be a $100 billion infrastructure investment over three decades.

James P. Redeker, the commissioner of transportation, told the Finance, Revenue and Bonding Committee that the administration would increase annual transportation borrowing from the existing $1.4 billion to nearly $2 billion.

While Malloy has pitched his plan as a hard-to-imagine vision for remaking transportation over 30 years, Redeker’s public-hearing testimony came in a more familiar format: a five-year capital plan of $10 billion.

The additional spending largely would pay for planning, with $1.75 billion of the $2.8 billion going for rail projects, nearly $900 million for bridges and highways, $101 million for bikeways and $43 million for buses.

“This is the gear up,” Malloy told reporters before the hearing. “This is what we do during the period of the next four years to move the ball forward to what ultimately should be our goal, a first-in-class transportation system.”

The major highway projects that would get planning money include the reconstruction of the aging I-84 viaduct through Hartford and the Waterbury “mixmaster,” the tangle of elevated ramps and bridges that comprise the I-84/Route 8 interchange. It also would cover improvements to I-95 from Stamford to Bridgeport and Old Saybrook to New London.

The capital plan covers five years, but Malloy spoke about the gear-up period as the next four years, which coincides with the time left in his second and presumably final term as governor.

The public hearing came as Malloy announced that ridership on Metro-North, the nation’s busiest commuter railway, had increased by 1.5 percent last year to 39.5 million passenger trips.

Legislators were generally receptive to the five-year plan, other than pointedly noting that the administration has yet to identify revenue to pay for annual transportation borrowing that would jump to $2 billion next year and to $3 billion in 2020.

The governor’s special commission on transportation revenue begins its work Tuesday and faces a reporting deadline of late summer, giving Malloy and the legislature the option of a special session this fall on transportation funding.

Redeker’s testimony before the Finance, Revenue and Bonding Committee was overshadowed Monday by the Appropriations Committee’s approval of revisions that dramatically remake Malloy’s budget proposal for the next biennium.

The committee restored $514 million in spending cuts in the first year of the two-year spending plan, likely setting the stage for a legislative debate over raising taxes to balance the budget. Any tax increases adopted now could complicate efforts this fall to adopt new sources of transportation funding.

Even without a more ambitious program of transportation improvements — and two-thirds of the governor’s plan would merely maintain and preserve existing infrastructure — the state is facing a need for new transportation revenue.

The special transportation fund, which uses fuel taxes to pay the debt service on transportation borrowing, is projected to go broke by the fiscal year that begins July 1, 2017.

“Our revenue source is drying up,” Malloy said. “The idea we’re having a discussion on how to pay for things, we have to have that discussion anyway. We’re going to go into negative numbers fairly shortly. So it’s time to take this issue on for a whole bunch of reasons, including that one.”