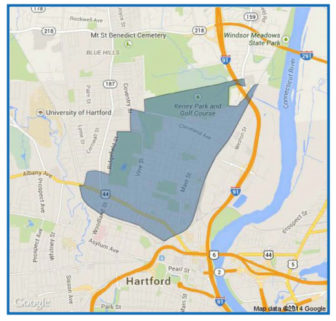 Washington – Hartford has won out over dozens of other communities trying to achieve “Promise Zone” status, a designation that will bring an impoverished city neighborhood priority access to federal resources, the White House announced Tuesday.

The Promise Zone program was initiated last year by President Obama as a way to leverage private investment in the hopes of curbing crime and raising living standards.

HUD said nearly half of the neighborhood’s 24,000 residents live below the federal poverty level with a per-capita income of about $12,099. Only about 38 percent of residents have a high school degree.

“In addition, the area is marked with several blighted commercial and industrial sites,” HUD said.

The North Hartford Promise Zone is one of eight such communities given that status by the Obama administration, a list that also included neighborhoods in Camden, N.J.; Indianapolis, Ind.; and St. Louis, Mo.

The communities were selected from among 123 applicants from all 50 states, Puerto Rico and the District of Columbia. It is the second round of Promise Zone designations. Five others were announced last year.

“A zip code should never limit the hopes that folks have for themselves or for their children,” said HUD Secretary Julian Castro.

Sen. Chris Murphy, D-Conn., said he had worked with Hartford Mayor Pedro Segarra since 2013 to win Promise Zone status for the Hartford neighborhood. He said his latest pitch to the HUD secretary came in an April 15 op-ed  in the Hartford Courant.

“I dove into this effort head first after I was elected to the Senate and have worked closely with a team of community leaders and organizations every step of the way,” Murphy said. “North Hartford has a booming legacy of post-war manufacturing, where small factories and commercial enterprises employed thousands, and middle class families thrived. But in the 1960s, businesses began to move elsewhere, poverty and crime seeped in, and so began a downward spiral.”

Local partners who have promised aid include the Connecticut Center for  Advanced Technology, the Village for Families and Children and the Hartford  Police Department.

“The Promise Zone designation will help us continue efforts to restore North Hartford to the prosperous neighborhood that it once was,” Segarra said. “The benefits of bringing back businesses to North Hartford, expanding educational and job opportunities and improving residents’ health and wellness will stretch beyond the three neighborhoods in the zone and reach far into the future.”

Rep. John Larson, D-1st District, said, “This is a tremendous step forward for the City of Hartford and the countless men and women of the North End.”

Beth Schiavino-Narvaez, the superintendent of Hartford’s public schools, said she hoped the designation would help her close performance gaps in the city’s schools.

“There still remains a vast disparity of performance — and resources — between our magnet schools and our neighborhood schools, particularly in the northern part of Hartford,” she said.