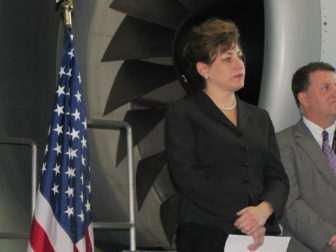 The acceptance letters have been mailed and enrollment at the University of Connecticut is set to increase next year, but the school’s president warns she may not have the money to hire the necessary faculty.

“We are preparing for the worst,” UConn President Susan Herbst told her governing board Wednesday. “There was talk earlier all about the faculty hiring we are doing: That’s not happening because we may be facing a $40 or $50 million operating deficit.”

The hiring and enrollment initiatives were part of a 10-year, $2.1 billion plan proposed by Gov. Dannel P. Malloy and adopted by state legislators in 2013. That plan – dubbed Next Generation – would increase enrollment at the state’s flagship university by 30 percent and full-time faculty by 259.

Two years later, that plan has been scaled back as lawmakers struggle to close the state’s deficit and probably will not be able to boost support for the university enough to fully execute the plan.  UConn has already hired some of the faculty required for the Next Generation expansion.

The university reports it would need to increase spending by $95.3 million — or 8 percent — in the upcoming fiscal year to fully fund Next Generation and meet other cost increases. The new spending would cover the cost of operating new buildings, hiring additional staff, giving unionized staff a 5 percent pay raise, and funding increased health and retirement benefits.

University officials had planned to pick up two-thirds of the increased spending through tuition and fee increases, and were relying on the state to provide an additional $29.8 million to cover the remainder.

But the Democratic governor’s budget proposal recommended cutting state support to the university by $9.8 million in the fiscal year that begins July 1. The legislature’s budget-writing committee, however, has recommended increasing state funding by $16.7 million.

Both budgets would leave the university with less funding than they say they need, with the shortfall ranging between $12.5 million and $25.9 million.

“We did what we could,” Sen. Danté Bartolomeo, the senate chairwoman of the committee that oversees higher education, said during an interview Tuesday.

“It is slowing down. We are not going to be able to do as much as we would like,” Scott Jordan, the university’s budget chief, told the Mirror during a recent interview.

The plan adopted by the legislature two years ago had anticipated increasing enrollment by 755 students next school year and faculty by 28.

University leaders have boasted about lowering their student-to-faculty ratios in recent years. It is unclear what effect the cutbacks will have on class sizes and course availability.

In addition to the operating support UConn expected to implement Next Generation, the state also promised to provide the school $2.1 billion to build new dorms and classrooms to accommodate the 6,580 additional students and to replace and renovate outdated buildings.

The state’s fiscal squeeze has not impacted those plans, however, since the state pays for such construction projects with borrowing that has little impact on the state’s deficit.

“The question is how does the state expect us to pay to operate those buildings without more support,” asked Jordan. “If there is no additional money, that is frustrating for us.”