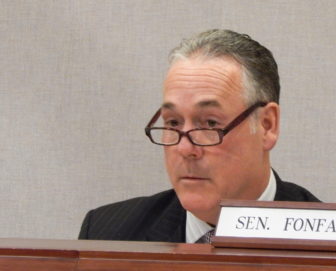 A legislative panel not only recommended hefty tax increases to balance the next state budget, but also endorsed enough to run up more than $300 million in surpluses by 2017.

The reason for that became apparent late Thursday when a new report downgraded how much revenue growth the state can count on in its new budget.

And with only two months left in the fiscal year, the governor and legislature are running out of time to eliminate the red ink in the current budget. If they can’t, they probably will tap Connecticut’s emergency reserves, borrow, or carry certain expenses into the next budget — where big tax increases already are under consideration.

Building a cushion in the next budget

The legislature’s Finance, Revenue and Bonding Committee recommended a plan this week that helps to close that gap by boosting state tax and fee receipts by $1.8 billion over the next two years combined. The plan increases income, sales, corporation and other taxes to help support a $40.5 billion spending plan from the Appropriations Committee that restores many of the social service cuts offered by the governor.

The committee plans would also yield surpluses of $315 million over the next two years combined. A significant surplus can be politically difficult to defend when raising taxes by large amounts.

Yet income tax receipts, which had been trending modestly upward until the final week of April, slipped over the past week. And based upon the data in the new consensus report, three quarters of the finance committee’s surplus in the next biennial budget eroded.

Though the finance committee was focused on finding the right mix of revenues to sustain vital programs while not overburdening middle-income households, Rep. Jeffrey Berger, D-Waterbury, co-chair of the finance committee, said an important fiscal “cushion” fell into place. “We saw how the income tax revenues were going and we had to be leery of that,” he said.

Though both income tax receipts and overall general fund revenues would grow in each of the next two years, this growth will be less than originally anticipated.

Income tax receipts should climb by about $465 million next fiscal year, approaching $9.7 billion, according to the new report. But that’s about $90 million less than was expected for 2015-16 when the deficit projections were developed.

Similarly, overall general fund revenues now are expected to grow by almost $70 million next year to $17.36 billion. That’s also about $90 million below the level anticipated earlier.

The new report also reduced projected general fund revenues for the current fiscal year — which ends June 30 — by almost $70 million from the amount forecast back in January.

The new totals, which primarily reflect reductions in income tax receipts, also are down about $30 million from earlier this month, when nonpartisan legislative analysts estimated the current budget was on pace to finish $178.9 million in deficit.

Though this represents just 1 percent of the general fund — which covers the bulk of the state’s annual operating costs — anything above 1 percent is deemed significant because so much of the budget is fixed by contract or other legal requirements that make it difficult to reduce on short notice.

The governor’s budget office estimate for this year’s deficit is slightly less than that of nonpartisan analysts, standing at $162 million.

Comptroller Kevin P. Lembo must submit his next monthly budget projection on Friday.

Malloy spent much of last summer and fall insisting, as he ran successfully for re-election, that there wouldn’t be a deficit in the current fiscal year or in the next budget.

Though revenues have eroded, the administration also insists it continues to search for new options to cut spending.

“There are still two months in the fiscal year until June 30th,” Office of Policy and Management Secretary Benjamin Barnes, Malloy’s budget director, wrote in a statement Thursday. “We will take appropriate action to achieve additional cost savings and keep our state’s budget balanced for the year.”

But Senate Minority Leader Len Fasano, R-North Haven, charged Thursday that bipartisan talks earlier in the year would have led to a stable state budget.

“Month after month, in letter after letter, we have warned Governor Malloy that hesitation will lead to devastation,” Fasano wrote in a statement.  “Despite those repeated warnings, Governor Malloy has been either unable or unwilling to confront our state’s fiscal crisis.  Republicans have offered him solutions and advice, and he has dismissed us time after time. This mess is Governor Malloy’s. It’s a reflection on his leadership. Unfortunately, state residents will be the ones who will have to clean this mess up.”

Though Republican legislative leaders insist they have ideas to close this year’s deficit, they have refused to disclose them publicly, saying they only will do so in negotiations with the governor and Democratic lawmakers.