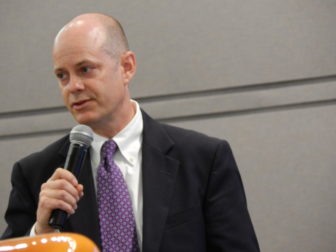 Experts say exposure to trauma and other significant stress early in life can have profound effects on children’s development and the way they see the world.

Those running Connecticut’s Medicaid program see the impact in another way too.

“We pay for a lot of medical and behavioral health services, and chances are many of those are as a result of children and/or adults who have experienced childhood trauma,” William Halsey, the director of integrated care at the state Department of Social Services, said Monday during a presentation for the state’s Three Branch Institute, a program aimed at improving the well-being of children involved with the child welfare system.

Decades of research have linked childhood trauma with a greater likelihood of developing both mental and physical health problems later in life — including depression, obesity, heart disease and cancer.

Studies suggest that the risks of health problems are particularly pronounced among those with four or more different types of adverse childhood experiences — known as ACEs. In recent years, scientists have been uncovering ways that significant stress early in life can lead to disease.

And policymakers in Connecticut are now trying to target that stress more directly, hoping that preventing exposure to trauma or identifying and treating it early can lead to better health, education and social outcomes.

State social service officials are looking to expand or introduce parenting programs and other early childhood interventions that can be shown through data to be effective. In New Haven, there are several initiatives underway to reduce exposure to trauma, with the goal of improving health care outcomes while lowering costs.

ACEs are the single most preventable cause of mental illness, incarceration, drug and alcohol abuse and child maltreatment, said Alice Forrester, executive director of the Clifford Beers Clinic in New Haven, which is involved in many of those initiatives.

But Forrester said Monday that tackling the problems caused by trauma will require shifts in thinking. Sometimes people are afraid to talk about trauma or adversity for fear it could upset someone, but it’s important that those problems be addressed broadly, not just by specialists, she said.

Sixty percent of the children seen at Forrester’s New Haven clinic have experienced three or more different types of ACEs, she said.

A 2012 survey of Connecticut adults found that 61 percent of respondents had experienced at least one form of adverse childhood experience before turning 18, the equivalent of 1.6 million state residents. One in three reported experiencing at least one type of abuse, and half reported at least one type of household dysfunction — which, on the survey, included domestic violence, parental separation or divorce, or having a household member who had mental illness, was incarcerated or abused drugs or alcohol.

“ACEs is a significant problem here in Connecticut,” said Carol Stone, supervising epidemiologist at the Department of Public Health and the project director and principal investigator on the survey.

Those with at least one ACE were less likely to own a home or have a high school degree. ACE rates also varied by race; 58.8 percent of whites reported at least ACE, compared to 72.3 percent of African Americans and 74.8 percent of Hispanics.

Number of adverse childhood experiences
In a telephone survey, Connecticut residents were asked whether they had experienced one of eight different forms of abuse or household dysfunction before turning 18. The numbers refer to the different types of adverse experience a person reported.
CT Department of Public Health

New Haven is home to a variety of initiatives aimed at better identifying and treating trauma and reducing chronic stress among families.

One coalition has trained more than 900 public school staff, as well as truancy officers and parks and recreation employees, on recognizing and responding to trauma, and provides services to students in some schools. Forrester said they asked principals which students they stay up at night worrying about. 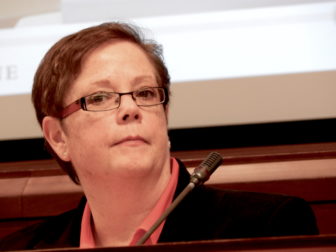 And another program, the New Haven MOMS Partnership, focuses on addressing stress and depression in low-income mothers as a way to prevent ACEs in their children. Depression can make it hard for mothers to provide the sort of caregiving needed for healthy infant development, and maternal depression has been linked to consequences in children including delays in social and emotional development, lower academic achievement and a higher risk of being diagnosed with mental illness by adolescence. Early data suggest that participants in the MOMS Partnership — which provides services to mothers in community locations including food pantries, a school and a Stop & Shop — had reductions in depressive symptoms and parenting stress and increased positive parenting behaviors.

Halsey said the challenge is to keep moving upstream, to address ACEs early or prevent them altogether.

“We would love to partner with anybody that is interested in trying to prevent those from happening,” he said.