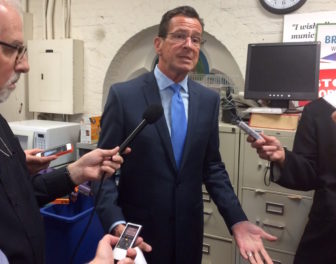 At issue is Republican opposition to Malloy’s proposal to repeal stiffer penalties for drug possession within 1,500 feet of a school or day care, which exposes most urban drug defendants to enhanced sentences. Sixty-four percent of those charged with drug possession in school zones are minorities, according to the Sentencing Commission.

“To treat those folks differently because they live in those communities is patently unfair and, if not racist in intent, is racist in its outcome,” Malloy had said in brief remarks to reporters after an unrelated event.

Malloy’s comments came on a day when he was trying to build public support for his “Second Chance Society” initiative, which includes an effort to reduce incarceration for drug possession.

The Democratic governor held a press conference at a playground in New Haven with Scott Esdaile, the leader of the NAACP in Connecticut. There, Malloy talked about the racial disparity in drug sentencing without using the word “racist.”

“Let’s stop letting tough-on-crime fear-mongering stand in the way of changing our laws to be smart on crime and to eliminate urban and racial discrimination,” Malloy said.

While the school-zone laws ostensibly were passed to keep drugs away from children, in densely populated cities the laws also mean that a drug user arrested in his own home can face a mandatory minimum sentence of two years in prison.

“I’m one to commend the governor for taking this head-on,” Esdaile said.

Malloy complained about Republicans who have issued press releases incorrectly accused him of proposing to reduce a charge of selling drugs to a misdemeanor. His bill applies to possession, not dealing. 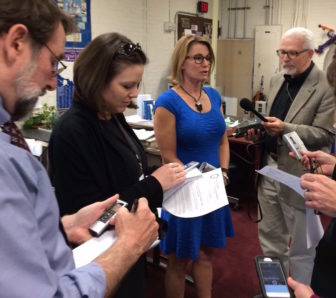 One GOP legislator says Malloy’s bill would turn possession of two pounds of heroin into a misdemeanor, which the legislator called “incomprehensible.”

“You’re right. It is incomprehensible,” Malloy said. “It’s also not the reality.”

The only word that resonated among Republicans was “racist.”

Klarides held an impromptu press conference in the Capitol press room to denounce the governor, saying his use of the word was part of a pattern of Malloy’s bullying and demeaning those who disagree with him.

She suggested that Malloy, who is set to become chairman of the Democratic Governors Association next year, was more interested in making national headlines than governing. Perhaps, she said, Malloy should turn over his office to the lieutenant governor.

“He should figure out where he is and what he wants to do with his career,” Klarides said. “Because if this is about making a national name for himself, he should step down and let Nancy Wyman take over, because he clearly isn’t interested in doing the job he was elected to do.”

Malloy showed up less than an hour later to respond. He offered no apology and expressed no regret.

“I haven’t said everybody’s a racist,” Malloy said. “What I’ve said is that there are racist implications, and to deny race implications in this situation I think is a gross mistake.”

While Klarides met with House Democratic leaders to craft a response to Malloy, the governor met with members of the legislature’s Black and Latino Caucus to talk about his commitment to passing the sentencing bill.

None would discuss their meeting with the governor or comment on his use of the word “racist.”

“I think the situation here is a little bit too volatile at this point so I don’t want to add to it,” said Rep. Larry B. Butler, D-Waterbury.

“This is a difficult policy issue where there can be legitimate disagreement, but ascribing motives to people on opposite sides of the issue is not productive or helpful toward the ultimate goal of passing legislation that is important to hard-working families,” Sharkey said.

“We cannot condone injecting racism into the debate over challenging legislation,” Aresimowicz said. “Questioning the intentions of those with differing opinions is counterproductive to the work that needs to be done in the legislature.”

When the House reconvened after 8 p.m., the chamber quickly passed several bills with bipartisan support.