Washington – A rash of cases involving police violence against young black men — most recently including the death of a Baltimore man in police custody  — has bolstered the case for body-worn police video cameras both in Connecticut and Washington.

In Washington, the GOP-led Senate Judiciary Committee will hold a hearing Tuesday on the use of police body video recorders, and on President Obama’s proposal that the federal 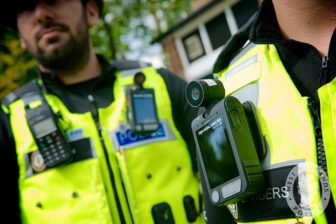 “We must ensure that state and local law enforcement agencies have the tools and guidance needed to develop and implement strong and effective body worn camera programs, and I am pleased that the Senate Judiciary Committee is looking closely at this issue,” he told the Connecticut Mirror. “Recent tragic experiences in Ferguson, Cleveland and Baltimore all support increased investment in this technology by state and local law enforcement. “

But Joseph Dooley, the president of the Connecticut Police Chiefs Association, cautioned that the technology won’t solve all problems and has its  own challenges — besides a high cost.

“The general feeling is that they are not the complete answer, but can provide some transparency,” said Dooley, who is chief of Southern Connecticut State University’s police force.

He said there are still several unresolved questions concerning the use of the cameras, including where to store the terabytes of data collected and how to cope with the fact that the cameras are an evolving technology and can become quickly outdated.

“But they have their place,” Dooley said. “As time goes by, more and more [police] departments will have them.”

In a recent study, the non-profit Police Executive Research Forum said, “The decision to implement body-worn cameras should not be entered into lightly.”

The forum said the emergence of body-worn cameras has already had an impact on policing, and this impact will only increase as more agencies adopt the technology. But it warned that once an agency “goes down the road” of deploying body-worn cameras — and once the public comes to expect the availability of video records — “it will become increasingly difficult to have second thoughts or to scale back a body-worn camera program.”

“By facing the challenges and expense of purchasing and implementing a body-worn camera system, developing policies, and training its officers in how to use the cameras, a department creates a reasonable expectation that members of the public and the news media will want to review the actions of officers,” the study said.

The issue of body-worn cameras has also raised privacy concerns.

The study recommended police turn off their cameras during strip searches, interviews with suspects or other sensitive situations.

But the Police Research Forum, which has been invited to testify at Tuesday’s  Senate Judiciary Committee hearing, said “with certain limited exceptions…body-worn camera video footage should be made available to the public upon request — not only because the videos are public records, but also because doing so enables police departments to demonstrate transparency and openness in their interactions with members of the community.”

The forum also recommended agencies have “clear and consistent protocols” for releasing recorded data to the public and the news media and that each agency’s policy be in compliance with the state’s public disclosure, or Freedom of Information Act, laws.

A coalition of civil rights and civil groups including the NAACP and the ACLU has issued a set of guidelines that recommends prohibiting police officers from viewing body camera footage before filing their reports so the reports are not influenced by the footage.

The coalition also asks police to develop policies with the help of the public, to avoid using facial recognition and other biometric technology in examining the footage, and to set limits on how long data is retained

They coalition also recommends the footage obtained be widely available for public and media review rather than remain solely under police control.

Despite the challenges, there’s evidence body cameras may become ubiquitous in police work.

“We’re very interested in this technology, and believe that it can help keep our kids, our families, and our police officers safe,” said Brett Broesder, spokesman for Bridgeport Mayor Bill Finch. “There is a significant financial investment, so it is important to start the conversation early with elected leaders, community members, and with the police union.”