CT to make a start on electric vehicle incentives

As recently as last winter Connecticut legislators, higher-ups at the Department of Energy and Environmental Protection, automobile dealers and environmental activists were expecting that this legislative session would help complete the effort begun nearly two years ago to get more residents buying and leasing plug-in electric vehicles as a hedge against climate change and poor air quality.

The plan had been to add financial incentives to buy or lease electric vehicles — proven successful in other states — to the charging station build-out that now boasts about 350 public chargers in about 175 locations. But in the face of ever-tightening state finances, the idea of using state funds for rebates or allowing sales tax waivers on EVs quickly became non-starters. While there is legislation moving through the General Assembly that contains a number of EV policy measures, it does not contain “cash on the hood” for consumers.

But the Connecticut Mirror has learned that Gov. Dannel P. Malloy is about to unveil an initial financial incentive program for EVs using money from outside the state budget. According to several sources, Malloy will announce that $1 million from the Northeast Utilities/NSTAR merger settlement fund will be made available for rebates for EV purchases and leases.

Malloy also tapped the fund, more than $400 million when it was announced in 2012, for the EV charging station program. A total of $1 million has gone to that since July 2013, with about $200,000 remaining to be spent. The charging station program provides financing up to $10,000. Those stations must be available to the public 24 hours day, and free for the first three years.

Charging stations and financial incentives for EVs have posed a chicken-and-egg conundrum. Charging-station availability has long been considered a key to helping potential EV drivers get over what’s known as range anxiety – the fear that their car will run out of power. But without the car volume, many who would otherwise install the pricey chargers are reluctant to do so.

EVs are expensive. Their prices start around $25,000 and top out in excess of $70,000 for high-end cars like Teslas. Experiences in the more than one-dozen states with purchase/lease incentives indicate that an extra financial push beyond the existing $7,500 federal tax credit is needed.

In Georgia, $5,000 rebates alone have propelled the state into one of the top EV registration states in the country, even without any of the other perks states are using to coax consumers into EVs. Access to HOV lanes is one popular tactic, as are special parking privileges. Several states are looking at ways to lower charging costs with cheaper electric rates during times of low electricity use, such as overnight.

“A lot of actions are important,” said Nic Lutsey, program director of the International Council on Clean Transportation, a research organization that surveys state and city actions to support EVs as well as their results.

“It’s generally also true that those leaders are not just providing incentives at the point of sale,” he said. “They have some combination of these.”

California has taken an all-of-the-above approach to EV incentives, including rebates, HOV lane access and experiments with time-of-day rates for charging. It has propelled California into the top EV state by far, accounting for 50 percent of the 119,000 new EV registrations nationwide in 2014 and a national high of 3 percent of new car registrations in the state.

That sluggish performance comes despite Connecticut’s participation in a multi-state zero emission vehicle action plan designed to get 3.3 million electric- and fuel cell-powered cars on the road nationally by 2025. And it’s despite the state’s fairly robust charging station network, which Lutsey described as being “in the middle of the pack” nationally.

“It doesn’t seem like chargers is the lever to pull,” he said contemplating what the state’s next step should be. 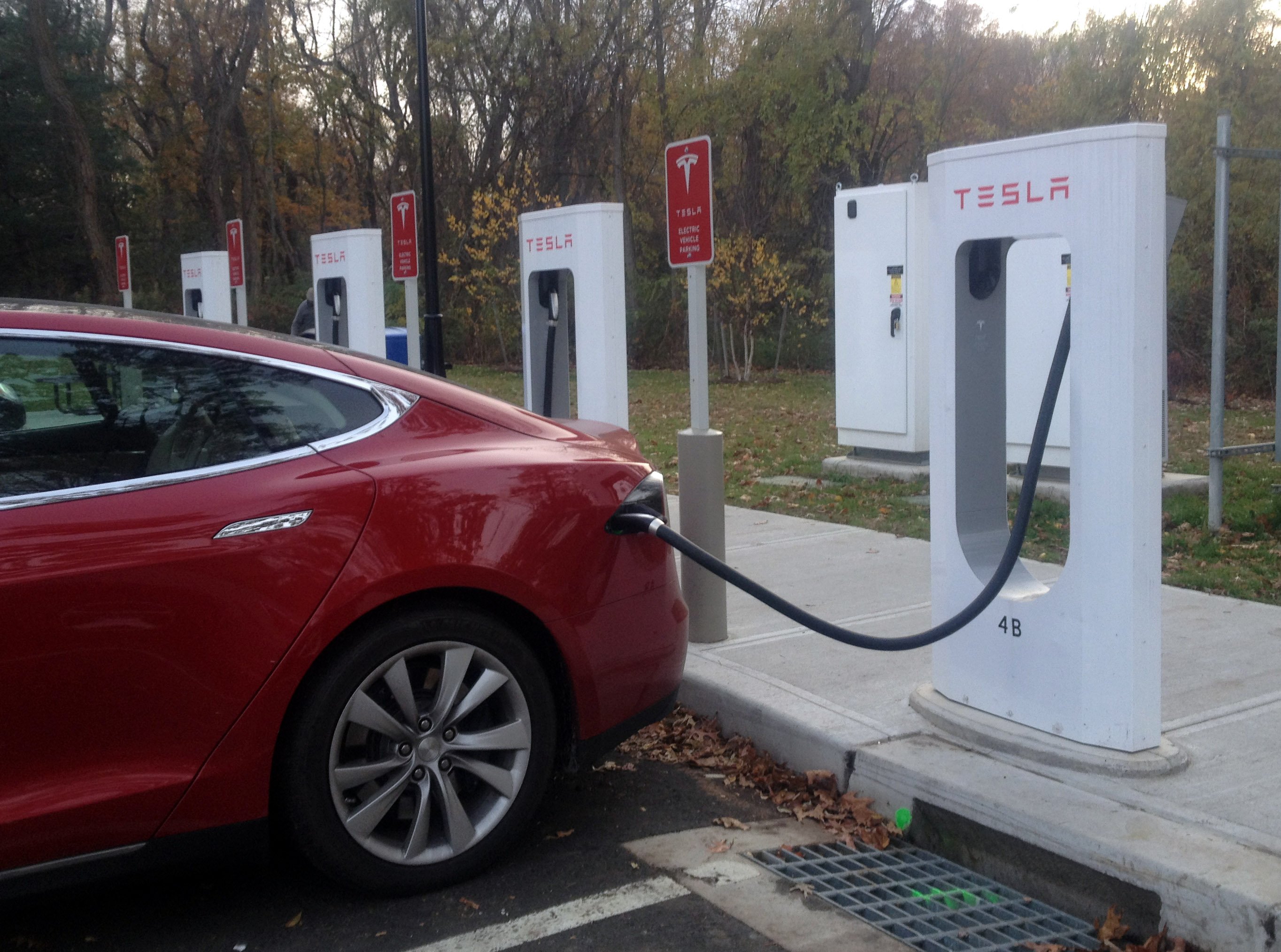 A Tesla charging station in Greenwich.

Details of Connecticut’s rebate plan are unclear, but sources indicate it is likely to be based on the program in Massachusetts, which assigns rebates up to $2,500 based on a vehicle’s battery size. The Massachusetts program, called MOR-EV, is not even a year old, but just last month added a second round of $2 million in purchase incentives, which comes from the state’s earnings through the Regional Greenhouse Gas Initiative.

The Connecticut rebate program is not expected to derail the bill in the legislature to provide non-puchase incentives, and environmental groups continue to work with legislators to fine-tune its provisions.

Initial plans for HOV lane access are likely to be deleted from the bill after the Department of Transportation pointed out that the state only has 19 miles of HOV lane, split among three different unconnected highway areas, none of which are in the congested parts of southwestern Connecticut.

“On balance, looking at the situation, we thought it’s unlikely anyone is going to go out and buy an electric vehicle because they can drive on one of a tiny handful of HOV lanes,” said Shannon Smyth, a staff attorney with Connecticut Fund for the Environment, who has been working with legislators. “It’s a relatively weak incentive.”

Initial language to require various form of preferential parking for EVs is also likely to be eliminated after organizations representing municipalities and businesses objected.

The bill is still likely to begin the regulatory process for establishing time-of-day charging rates, and generally it attempts to eliminate barriers to electric vehicle ownership.

“So things like standardizing the signage on charging station so it’s less confusing to consumers. Things like making sure that, as the state plans for more EVs that it educates consumers about them,” Smyth said. “Just generally to move the state forward in realizing that this can be a key part of our transportation plan.”