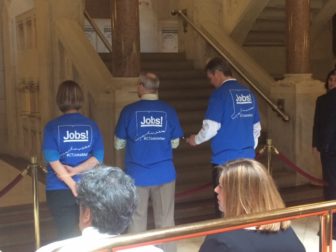 The state attorney general’s office declined Tuesday to help the Mashantucket Pequot and Mohegan tribes ask the U.S. Department of the Interior for a statement supporting their bid for casino expansion in Connecticut.

The tribes wanted a statement reassuring state legislators that a bill allowing them to jointly build a casino outside tribal lands would not jeopardize agreements that now give the state 25 percent of the tribes’ gross slots revenue, nearly $280 million a year.

Without such assurances, legislators refuse to pass a bill authorizing construction of a casino in the I-91 corridor north of Hartford to help the tribes compete with a gambling resort under construction in Springfield.

“[W]e do not believe it would be appropriate, absent explicit statutory authority or an appropriate client agency, for our Office to negotiate any such proposed submission on behalf of the State of Connecticut,” Robert W. Clark, the special counsel to Attorney General George Jepsen, told the tribes in an email.

Clark also told the tribes it was their right to seek help from the Department of the Interior, but he warned that the department could not provide meaningful guarantees that casino expansion was without risk to Connecticut.

The same was true of the tribes’ promise to sign an agreement affirming that a new casino deal would not require the state to negotiate a new gaming compact, nor would it negate the slots deal, he wrote.

“While an agreement by the Tribes and informal guidance by DOI [Department of the Interior] may help mitigate some of the risk we outlined in our April 15, 2015, letter to legislative leaders, they would not eliminate those risks,” Clark wrote.

The Department of the Interior oversees Indian gaming and the federal recognition of tribes through the Bureau of Indian Affairs.

Clark’s email, which referred to a joint statement drafted by the tribes on May 13 for Jepsen’s consideration, made clear that the attorney general’s office stands by concerns raised in the April 15 memo about a new casino negating the profit-sharing deal and possibly easing the way for another tribe to open a casino should it obtain federal recognition.

Those concerns contributed heavily to the decision by legislative leaders to delay a vote authorizing casino expansion until 2016. A revised bill expected to win passage Wednesday by the Senate is largely symbolic, authorizing the tribes to seek support for a casino from potential host communities.

“The exchange with the Attorney General’s office is indicative of the commitment the Mohegan and Mashantucket Pequot Tribes made to the public and to elected officials from the very beginning of this public conversation about protecting 9,300 jobs and revenue that could be lost to competition in Massachusetts and New York, and that is to fully address all concerns raised,” Patty McQueen, a spokeswoman for the tribes’ joint casino effort, said in an emailed statement.

“The legislation before the General Assembly enables the Tribes and the state to continue those conversations while also beginning the effort to protect jobs and revenue,” McQueen said.

Jepsen’s memo last month warned that legislation giving the tribes exclusive rights to a new casino was itself a gamble, potentially endangering the current profit-sharing deal with the tribes and exposing the state to claims of illegal favoritism.

His memo addressed two main issues: The potential impact on the state’s existing tribal compacts, which give the tribes exclusive rights to have slots at the Mohegan Sun and Foxwoods Resorts Casino in return for 25 percent of gross slot revenues; and what would happen should another tribe win federal recognition in Connecticut.

“Both of these issues pose significant uncertainties and potentially serious ramifications for the existing gaming relationships between the State and the Tribes,” Jepsen wrote.

In Clark’s email, he advised the tribes that Jepsen is sympathetic to their concerns about the desire for a new casino to compete with a gambling resort under construction in Springfield.

“Our role, however, is to provide sound legal advice to legislators about the potential risks associated with such proposals,” Clark wrote.