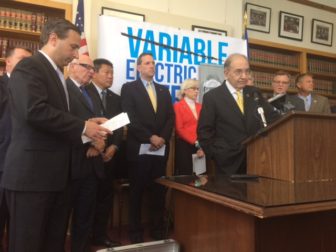 After a six-hour debate that ended around 7:15 p.m., the Senate placed the bill on its consent calendar, a procedural device used to adopt several bills simultaneously and unanimously. The bill now goes to the House.

The bill would be the second passed in two years to combat third-party electric retailers who attract customers with low teaser rates, then bump them far above the standard-offer rate charged by Eversource or United Illuminating.

The 2014 law already requires a new billing format in July that gives consumers notice of when their electric contracts expire.

“I think we need to do more,” Looney said.

The ban would apply only to residential customers. Many businesses, especially large companies that are major consumers of electricity, have sophisticated staffs that can monitor the variable market.

“To ride the market is a very difficult challenge, even for a savvy, knowledgeable expert,” said Rep. Lonnie Reed, D-Branford, co-chair of the Energy and Technology Committee. “Data has been showing that some electric retailers have been taking advantage of consumers for their inability to crack the code.”

Unlike variable mortgages, there are no standards for what drives variable electric rates.

Reed said in the last quarter of 2014, when market rates should have been the lowest, 15 suppliers were “spiking the variable rates more than 30 percent above the standard offer, using the rate to dupe and fleece consumers.”

Electricity is bought and sold as a commodity, and third-party retailers compete with Eversource and UI, sometimes acquiring and re-selling power at cheaper rates based on their success in procuring power on the open market.

Eversource, the new name of Connecticut Light and Power, and UI, own the transmission system.

The bill would ban new variable contracts as of Oct. 1, but not completely extinguish variable rates. At the conclusion of contract, a consumer still could be assigned a variable rate if they do not sign a new contract or switch to the standard offer.

Rep. Tim Ackert of Coventry, the ranking House Republican on the energy committee, warned that consumers still need to exercise a measure of due diligence.

Energy regulators are to deliver a study in January, recommending further changes.

AARP, the consumer group whose membership is age 50 and above, sought a total ban, but the group’s chief lobbyist in Connecticut said the bill still was a major step forward for consumers.

“That is literally going to put Connecticut on the map as far as consumer protections for ratepayers are concerned,” said John Erlingheuser of AARP.

The industry opposed the bill, even the retailers who do not offer variable rates. Industry leaders said the market would weed out the bad actors, assisted by new billing disclosures required under the 2014 law.

But legislators from both parties agreed a stronger step was necessary to protect consumers.

Looney and other Democrats were joined at a press conference by Senate Minority Leader Len Fasano, R-North Haven, and other members of the GOP minority, a sight more common in Hartford than in Washington.

“This committee, under this leadership, has moved to include everybody in the conversation,” said Sen. Paul Formica of East Lyme, the ranking Senate Republican on the committee.

Despite the bipartisan support, passage was delayed for more than six hours over an unrelated dispute over scheduling other bills for debate.

Fasano said Democrats failed to deliver on promises made the previous evening. Senate Majority Leader Bob Duff, D-Norwalk, said, “I don’t see it that way, but I don’t want to get into a back and forth with Sen. Fasano.”

Both men minimized the dispute, with Fasano calling it a “family dispute” and Duff describing it as “a little bit of a speed bump.”