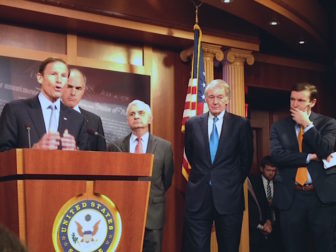 Washington – Sens. Richard Blumenthal and Chris Murphy are among a group of nearly a dozen Democratic U.S. senators trying to derail a proposed cut in Amtrak funding and instead help the passenger rail company tackle billions of dollars in backlogged repairs and capital improvements.

Blumenthal said Americans will take to the roads this Memorial Day weekend, and a lack of infrastructure spending will result in “a lot of cursing and fist-shaking.”

“I hope they direct those curses and those fists to House Speaker John Boehner,” Blumenthal said.  “For John Boehner to say that questions about Amtrak spending are stupid, is an insult to the American people.”

Boehner last week said it was “stupid” to ask about Democrats’ charges that years of GOP cuts to Amtrak’s budget could have contributed to the fatal Amtrak derailment outside of Philadelphia.

A Republican-controlled House panel approved a spending bill the day after that crash that would cut Amtrak’s budget again, providing the rail company with $1.1 billion, a cut of $251 million from this year’s budget.

Amtrak is a publicly funded railroad operated and managed as a for-profit corporation. Republicans say it is wasteful and inefficient because, outside of  the busy Northeast Corridor, Amtrak generally  doesn’t turn a profit.

Democrats counter that in serving the Northeast, Amtrak fuels a key part of the nation’s economic engine. They want Congress to give Amtrak the entire $2 billion in subsidies the railroad requested for the 2016 fiscal year, which begins on Oct. 1

Some Democrats want Congress to provide even more money so Amtrak can tackle a $21 billion backlog of repairs and capital improvements.

At a press conference Thursday in the U.S. Capitol, Democratic senators from the Northeast competed among themselves to be the harshest critic of the House Republican effort to cut Amtrak’s budget.

Sen. Chris Coons, D-Del., said the GOP has taken the nation down “an irresponsible path.”

Sen. Charles Schumer, D-N.Y., said  if Amtrak’s budget is cut, the railroad will have to choose between safety and upgrades, adding that it “will be forced to rob Peter to pay Paul.”

The National Association of Railroad Passengers (NARP)  is lobbying the Senate to restore the House cuts, which it said “are all the more indefensible coming only a day after a deadly Amtrak accident on the Northeast Corridor.”

NARP Vice President Sean Jeans-Gail said he is hopeful Sen. Thad Cochran, R-Miss., the head of the Senate Appropriations Committee, will restore the House’s Amtrak cuts because he has voted to restore cuts to the railroad in the past.

“We are going to get enough to keep Amtrak going for another year, but not enough to address a backlog of problems,” he said.

One problem in boosting Amtrak’s funding is spending caps imposed by the Budget Control Act of 2011. Under that legislation, automatic across-the-board spending cuts are implemented if Congress busts those caps.

Still, Sen. Ed Markey, D-Mass., is pressing for $2 billion to help railroads implement positive train control, a technology that could have stopped the train that crashed in Philadelphia.

And Murphy supports setting up a special $500 million fund for transportation issues in the Northeast Corridor.

“We’ve come to accept the regularity of major accidents and fatalities along the Northeast Corridor,” Murphy said. “This is not the case in other countries that make a decision to make safety upgrades on a regular basis.”

The Philadelphia crash has also prompted other congressional action.

Blumenthal  introduced a bill this week that would increase the amount of money Amtrak could pay to settle suits from the victims of the Philadelphia crash.

In the early  1990s, Congress set a limit on Amtrak’s financial liability at  $200 million, an amount that is believed to be insufficient to cover medical expenses and other damages from the May 12 derailment.