Under Malloy, a more diverse judiciary 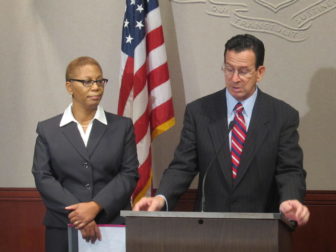 It happened to Lowell P. Weicker Jr. in 1994, John G. Rowland in 1996 and M. Jodi Rell in 2010: Those governors faced outcries for failing to include a single black lawyer in large classes of Superior Court nominees.

Gov. Dannel P. Malloy, whose latest nominees await confirmation votes by the General Assembly before it adjourns June 3, is the first Connecticut governor in two decades to avoid controversy over judicial diversity.

Thirty percent of the 47 judges Malloy has nominated to the Superior Court since taking office in 2011 have been minorities, twice the percentage of those named by his immediate predecessors, Rell and Rowland.

The higher percentage of minority lawyers being named to the bench reflects Malloy’s commitment to diversity, but also nearly two decades of effort by the judiciary and legal profession to demystify the process and broaden the pool of potential judicial candidates.

Governors can only nominate lawyers who have been approved by the Judicial Selection Commission, which screens candidates for intellect, experience and judicial temperament. In 1995, the year after Weicker was excoriated for nominating an all-white class of 13 new judges, only one black lawyer applied.

Last year, 11 of the 47 lawyers who interviewed with the commission were minority group members — one more than the 10 minorities who applied from 1990 to 1995, the first six years of the commission’s existence.

“It’s taken us a while, but we’re getting there,” said Rep. Tom O’Dea, R-New Canaan, a former member of the commission. “I do believe this governor has made diversity a priority, but he’s also been a beneficiary of a larger effort.”

Malloy’s latest group of four nominees — two white men, an African-American man and a white woman — were chosen from a pool of 231 candidates cleared by the commission. No demographic information is available about the pool, only each year’s applicants.

“Selecting qualified, diverse nominees is not an easy task – we do it exceptionally carefully because these decisions impact our future, and we’re working to build a Connecticut for the long-run, for everyone,” Malloy said two weeks ago in making the nominations.  “That’s why these selections are so important, and that’s why it’s so vital to find candidates who are representative of our diverse population.”

His latest nominees are Alice A. Bruno of New Britain, John B. Farley of West Hartford, Gerald L. Harmon of Southington and Edward T. Krumeich II of Greenwich. All were unanimously recommended for confirmation by the legislature’s Judiciary Committee.

Of his 47 nominees for the trial bench, Malloy has picked 14 minorities: two Asians, nine African-Americans and three Hispanics. Nineteen, or 40 percent, have been women, who now comprise 35 percent of the trial bench.

“I think if you look at our judiciary over the course of the years, I think we’ve made a lot of progress during the Malloy administration,” said Sen. Eric Coleman, D-Bloomfield, the co-chair of the Judiciary Committee. “Whether everyone is satisfied or not, probably not. But just in terms of the pace of the progress and the extent of the progress, I would give high marks.”

Coleman served on a working group appointed by Thomas D. Ritter, then the speaker of the House, in early 1996 after two governors failed to include a black lawyer among 23 nominees.

In the fall of 1994, Weicker nominated 13 judges: 11 white men and two white women. In the spring of 1994, Rowland nominated 10 judges: eight white men, one Hispanic man and one white woman.

“The real problem was that minorities had not even applied to the Judicial Selection Commission in meaningful numbers,” the group later concluded in a written report. One of the report’s findings was a belief among lawyers “that one had to be asked to apply, to be ‘tapped’ — like joining a secret society — before applying to become a judge.”

After the working group’s efforts, which included extensive outreach to broaden the pool of judicial candidates, the commission received 14 applications from minorities in nine months — compared to the 10 in the previous six years.

But Rell sparked a new outcry in April 2010 when she nominated an all-white class of 10 trial judges. The legislature’s Black and Puerto Rican Caucus blocked their confirmation until Rell promised to name a minority later in the year.

“We forced the governor to negotiate,” said Sen. Gary Winfield, D-New Haven, who was a House member in 2010. “I think Gov. Malloy has been good about making judicial diversity a part of every round.”

O’Dea, a lawyer and former commission member serving his first term in the House, said the outreach efforts have produced a “snowball effect” – as minority judges increase in number, they inspire more minority lawyers to apply to the Judicial Selection Commission.