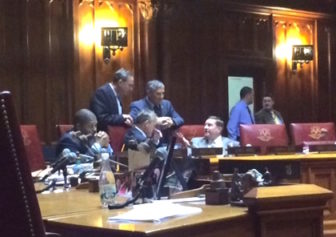 Salvaged by a late bipartisan deal, Gov. Dannel P. Malloy’s proposal to end racially disparate sentencing and reduce incarceration for non-violent crimes was passed at midnight Tuesday by the Senate and sent to the House.

“An Act Concerning a Second Chance Society,” one of the Democratic governor’s major initiatives for the session, was threatened two weeks ago when GOP legislators complained that Malloy had suggested their reservations about the bill were racist.

But the measure itself was given a second chance as the Republican minority leaders, Sen. Len Fasano of North Haven and Rep. Themis Klarides of Derby, co-sponsored bipartisan revisions ensuring its passage in the Senate, 22 to 14.

House Speaker J. Brendan Sharkey, D-Hamden, had been wary of the bill, noting that the GOP used a committee vote on a prior version to attack Democrats as weak on crime last fall. The support by Fasano and Klarides should help depoliticize the issue.

It was unclear, however, if Sharkey would have time to call a vote before the session reached its constitutional adjournment deadline of midnight Wednesday. By 3 a.m., he still had not shored up support for a budget.

The bill reclassifies most drug possession crimes as misdemeanors. For a second offense, the court could order an offender to enter a drug treatment program. Two subsequent offenses could result in a class E felony.

Under Malloy’s original proposal, repeat offenses for possession would not have exposed an offender to a felony conviction, but the Republicans sponsored adding the felony charge for repeat offenders.

As proposed by the governor, the bill still repeals the two-year mandatory minimum sentence for drug possession within 1,500 feet of a school or day care.

Nearly every housing unit in the cities fell within the school zones, meaning that urban residents faced a potential two-year mandatory prison sentence for simple drug possession in their homes.

A number of the legislature’s Republican minority have attacked the governor’s “Second Chance Society” as soft on crime, rattling Democrats who saw their majorities shrink last year in both legislative chambers.

But national GOP figures, including the anti-tax crusader Grover Norquist, have advocated similar policies. The policy director of Connecticut’s conservative think tank, the Yankee Institute for Public Policy, told legislators at a public hearing, “We send too many people to jail in this country.”

Democrats like Malloy, Hillary Clinton and Joe Biden are now on the same page as the Koch brothers and a growing list of GOP presidential contenders, including Sens. Marco Rubio of Florida, Rand Paul of Kentucky, Ted Cruz of Texas and Gov. Scott Walker of Wisconsin.

The Senate abandoned an effort Tuesday to pass domestic violence legislation intended to allow police, without a court hearing, to temporarily take firearms away from persons served with temporary restraining orders.

Klarides warned Malloy that her caucus would filibuster a House version of the bill, seeing it as a violation of the due process rights of gun owners. The Senate tried to attach the measure to a bill, but Republicans made clear they, too, would filibuster.