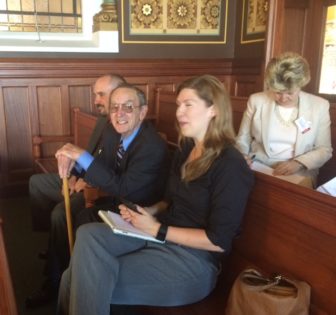 Robert Crook, with cane, watching the vote tally for Sunday hunting. He sought the bill for 20 years.

One of the Connecticut General Assembly’s epic lobbying campaigns, a 20-year story of close calls, colorful personalities and hardball politics, concluded Wednesday with final passage by the Senate of legislation allowing the bow hunting of deer on private property on Sundays.

Passage was a personal victory for Robert Crook, 77, the longtime lobbyist for sportsmen, and a reflection of how the spread of Lyme disease has made suburban legislators more sympathetic to calls by state environmental officials for a more aggressive attitude toward the explosion of the deer population.

“I told someone the other day I’d like to see it passed before I passed,” said Crook, who watched the debate from the Senate gallery, holding the cane he’s used since returning to the Capitol after a stroke and back ailments. “I’m happy, and I think many sportsmen are going to be happy, too.”

The Senate voted 28 to 8 to approve the bill. It now goes to Gov. Dannel P. Malloy, whose Department of Energy and Environmental Protection favored passage. The House endorsed it last week, 132 to 32.

Crook was assisted by the departure of a political nemesis, Donald E. Wiliams Jr., who was able to block passage during his tenure as the longest-serving leader of the Senate. Williams did not seek re-election last fall.

In 2013, passage of a bow-hunting bill nearly passed through a series of deals that tied its fate to legislation promoting early childhood education and, perhaps oddly enough, the prevention of animal cruelty.

Animal-welfare advocates in the House that year agreed to drop opposition to the hunting bill if the hunting advocates agreed to support their bill, which would have authorized judges to appoint an advocate for the interests of animals in civil and criminal cases involving animal cruelty.

The deal held in the House, where both measures passed within an hour of each other, but Williams did not see it as binding on the Senate. When he killed Sunday hunting in the Senate, the House GOP leader at the time, Lawrence F. Cafero Jr., retaliated by blocking passage of an early-childhood bill favored by Williams.

Another factor this year in Crook’s favor has been the spread of Lyme, a tick-borne disease named after the woodsy community of the same name in the lower Connecticut River Valley. Lyme, as well as motor-vehicle collisions with deer, have made non-hunters more attentive to the notion of wildlife management.

“It has the support of the Nature Conservancy and a number of other environmental groups since it encourages wise land management,” said Sen. Cathy Osten, D-Sprague, who brought out the bill.

Sen. Ted Kennedy Jr., D-Branford, the co-chair of the Environment Committee voted no, as did Williams’ successor in the Senate, Mae Flexer of Killingly.

Sen. Clark Chapin, R-New Milford, said wildlife professionals tell him that a healthy deer population should have 20 deer per square mile, while some parts of heavily forested Connecticut have 80 per mile.

Sen. Steve Cassano, D-Manchester, in urging his colleagues to pass the bill, said his son has had Lyme and babesiosis, two diseases spread by deer ticks.

“There is a need to reduce that population,” Cassano said.