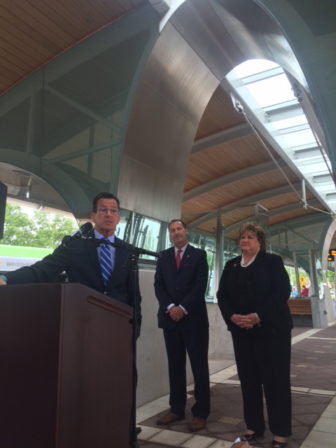 Gov. Dannel P. Malloy kicks off a transportation road show at the CT fastrak station in New Britain. At right are two mayors, Jay Moran of Manchester and Marcia Leclerc of East Hartford.

Gov. Dannel P. Malloy forced legislators to yield to his every key tax demand in budget negotiations last week, including setting aside a portion of the sales tax for the long-term transportation improvements that could be the governor’s legacy.

Now comes the harder task: Convincing the rest of Connecticut to accept his priorities and ignore the outcry from General Electric and other corporations threatening to flee over higher taxes.

On Monday, the governor began a transportation road show, announcing plans to expand the new bus rapid transit service, CT fastrak, to the east of Hartford. He will talk Tuesday afternoon about fixing the source of a chronic backup onto I-91 in Hartford from the Charter Oak Bridge.

Publicly, at least, Malloy is downplaying the outcry over the budget – GE’s threats, a Wall Street Journal editorial pronouncing him the nation’s worst governor, criticism from Joe Scarborough on MSNBC’s “Morning Joe,” and a request by the Connecticut Business and Industry Association to reopen budget talks.

Malloy is fighting a post-session narrative that the budget deal is a disaster, insisting in an interview that the real story of the 2015 legislative session is his two major victories: an infusion of cash into transportation, and a deal to adopt in special session his “Second Chance Society,” criminal justice reforms to reduce incarceration for non-violent crimes.

“This was a great session for my initiatives,” Malloy said. “So, yeah, I expended more political capital than I envisioned at the outset. I walked in here the day after election and said I am going to take on transportation, I am going to take on Second Chance Society. And it looks like I am going to have major victories, and I am extremely happy about it.”

Legislators, however, are talking about making revisions to tamp down the outcry over increased taxes on business. And, short-term, at least, the budget is a public-relations nightmare that business leaders say is rippling far beyond the state line.

“I’m hearing from colleagues in other business associations in other states. I can’t overstate the importance of this,” said Joe Brennan, the president of the Connecticut Business and Industry Association. “In our strong opinion, this really hurts our competitiveness.”

The Connecticut Republican Party is using the budget as a fundraising hook, setting a goal of $500,000 to help flip control of the General Assembly from Democrats to the GOP. That would require gaining 12 seats in the 151-seat House and four in the 36-seat Senate next year.

“We must stand together and fight back in 2016 to save our state for future generations to live and prosper in Connecticut,” said Jerry Labriola Jr., the GOP state chairman. “The creation of the Legislative Majority Trust will target 20 Democrats in the House and five Democrats in the Senate beginning today until November 8th, 2016.”

In Malloy’s view, he held the line on the worst of the tax increases approved by the legislature’s Finance, Revenue and Bonding Committee after the Appropriations Committee rejected many of his deep spending cuts. The legislature’s finance package included a new capital gains tax and expanding the 6.35 percent sales tax to many business-to-business services, items Malloy rejected.

“I think when the dust settles and people look at this against their previously stated goals, this budget and this spending package will stack up better than it is getting credit for right now — if I am to believe what they always told me, that transportation and work-force development and education were top priorities,” Malloy said.

The budget adopted last week on close votes in each chamber would boost revenues by $2 billion over the next two years by raising taxes and canceling previously approved tax cuts before they could start. Those increases would be partly offset by $436 million in sales tax receipts going to cities and towns to mitigate property taxes.

Malloy compromised on a bigger bottom line on spending than he proposed in February, but legislators said he yielded on none of what he branded as his core priorities on taxes.

Brennan, who says the administration has not responded to the request he made Friday for a meeting on the budget, said progress on finding a funding mechanism for transportation has faded as a priority for business, compared to tax increases on computer services and the adoption of unitary reporting rules.

“I understand where the governor is coming from. Transportation has been an issue for a long time,” Brennan said. “It’s got to be looked at in the context of everything else.”

The only reaction he is getting from his members, he said, are complaints about the tax increases on business, including a unitary reporting requirement compelling companies to share information on all of their operations — both in Connecticut and outside — and undergo a more detailed assessment of what profits are tied to their presence in this state.

Nonpartisan fiscal analysts estimate this would generate $62 million in tax revenue over the next two fiscal years combined. Businesses complain the tax consequence could be far higher. Republicans, who note no public hearing was held on unitary reporting this year, say no one knows for sure.

The governor accepted unitary reporting and bumping the top income-tax rate to 6.99 percent in the budget deal, but he stunned legislators late in negotiations when he demanded that a half-point of the sales tax be dedicated to transportation. At the time, legislators were considering using a full percentage point for property tax relief.

The governor, who had planned to call a special session for the fall on transportation funding after a special revenue panel made its recommendations, acknowledged that he had developed doubts that lawmakers would come back to raise taxes.

“So, yes, I seized the opportunity, and I am expending the political capital necessary to seize that opportunity,” Malloy said of his demand for sales tax revenue that legislative leaders were eyeing for property tax relief.

It is unclear what political capital Malloy has left with more than three years left in his second term.