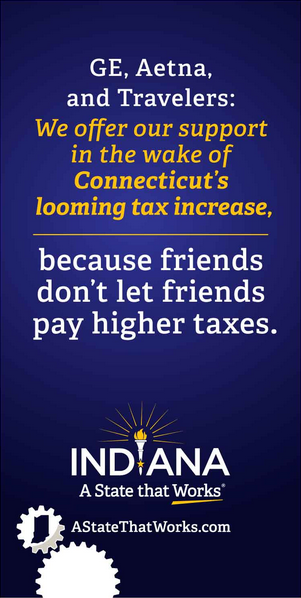 The ad was a reminder that Malloy’s higher profile as a designated hitter for the Democratic Governors Association, where he was attending private meetings Wednesday, also makes him a tempting target for return fire from the GOP.

All three companies had issued statements objecting to the tax increases in the recently adopted budget for the next biennium, led by GE’s threat to abandon its corporate headquarters in Fairfield. Aetna also raised the possibility of moving operations out of state.

The ad ran on a day when Malloy, who will be chairman of the DGA in 2016 when Pence will be among the Republican governors up for re-election, was politicking in Washington. He attended a fundraiser for the Connecticut Democratic Party and held undisclosed meetings related to his DGA duties.

All three corporations have been significant donors to the DGA.

Mark Bergman, a spokesman for Malloy, said Connecticut was not concerned about its corporate citizens fleeing to Indiana.

“Connecticut has one of the lowest effective corporate tax rates in the nation, lower than Indiana. We would stack our business climate, which is open and welcoming to all our residents, including the LGBT community, against anybody’s,” Bergman said. “That’s something Indiana can’t say.”

Pence faced a political firestorm in March for signing a religious freedom law that critics complained was a license to discriminate against gays.

Malloy had no public schedule Wednesday. His staff only would say he was in Washington for DGA business and a fundraiser.

Jared Leopold, the communication director of the DGA, declined to describe the governor’s meetings.

“Gov. Malloy is in Washington, D.C., today at private meetings with the DGA,” Leopold said. “We appreciate Gov. Malloy’s work in fighting for progressive policies in Connecticut and working to elect Democratic governors around the country.”

The governor’s itinerary Wednesday was not entered in his official calendar, leaving no public record of what business the governor was conducting. His calendar for the day was a blank page, other than the notation, “DNS.” His staff says that stands for “do not schedule.”

“The office practice is if he has a meeting that is official in nature, then they would go on the official calendar,” Bergman said. “At this point he has no official meetings in Washington.”

Malloy will be flying next week to the Paris Air Show. Bergman said the governor’s activities would be disclosed.