Bye: Malloy should have scaled back transportation plan to ease tax hikes

Sen. Beth Bye, co-chair of the Appropriations Committee, said the Democratic governor’s bid to remove about $224 million in tax hikes over two years might have been received better had Malloy proposed sacrificing some of the new transportation funding he requested.

Bye, a West Hartford Democrat, also told The Mirror that while the governor described offsetting the tax-hike-rollback with a simple 1.5 percent “across-the-board” spending cut, it primarily targets social services, education and municipal aid.

“What he was saying is: ‘Don’t touch any of my new money,’” Bye said, referring to a Malloy announcement Friday that was designed to appease businesses, but also frustrated his fellow Democrats in legislative leadership. “Had he done this differently, I think there still would have been concern, but the reaction wouldn’t have been the same.”

The new budget increases the funds dedicated to transportation by an average of about $32 million per year over current spending. The administration says Connecticut needs to boost transportation spending by 2020 to $350 million above this year’s level to keep its transportation program solvent and cover the debt service on new projects.

Democratic legislative leaders were stunned Friday when – one hour before they and a half-dozen urban mayors were set to tout a major municipal aid initiative in the new budget – Malloy pitched $224 million in cuts over two years to cancel a matching amount in business tax hikes.

This would reduce the overall tax increase in the biennial plan from $1.5 billion to just under $1.3 billion. That budget also cancels close to $500 million in previously approved tax cuts.

Of the total of about $2 billion in revenue boosts over two years, more than $1.2 billion involves changes to the corporation and hospital taxes as well as sales tax rates levied on data processing services.

As they negotiated and struck a deal on the new budget earlier this month, Democratic legislative leaders and the administration were struggling to close projected deficits that topped $1.4 billion next fiscal year, and $1.5 billion in 2016-17.

But as the deal was heading to the legislature, major corporations, including General Electric, Aetna and Boehringer Ingelheim, issued statements questioning their ability to grow jobs or remain in Connecticut in the face of the tax hikes.

Malloy came back Friday with a plan to scale back increases in corporation taxes and the sales tax on date processing and other services.

“I have always been clear that I believe that we need to be smart about spending, about revenue, and about our future,” the governor said last week. “Even as we have one of the lowest effective corporate tax rates in the nation, these steps are being made to protect Connecticut’s long-term interests.”

Malloy has not yet signed the budget sent to his desk. And since legislators still have to meet in special session to adopt policy bills related to the budget – regardless of whether tax or spending totals are modified – there will be an opportunity to consider changes soon.

Legislative leaders said they are considering meeting in special session on June 29 and 30, though no dates have been fixed yet. 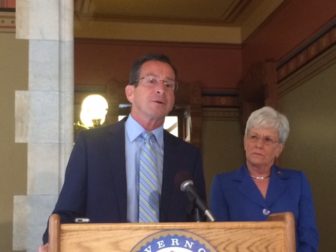 The new budget lawmakers sent to Malloy’s desk “certainly was the governor’s budget every bit as much as our budget,” Bye said. “We negotiated it in good faith.”

Though the final deal had more tax hikes than Malloy proposed, the governor had sought significant new revenue in his own plan back in February. This included $360 million in net tax hikes over two years – primarily aimed at corporations and hospitals – and $480 million by canceling previously approved tax cuts for consumers, the working poor, corporations and insurance companies.

The governor also sought deeper cuts in social services, health care and education than were in the final plan.

And while Malloy has heard from businesses, Bye said she and her Democratic colleagues have been hearing from other constituents as well.

“The parents of children with disabilities, the advocates for social services, they are calling my office, they are emailing,” Bye said, adding she’s received more than 100 correspondences over the last week urging her to safeguard funds for nursing homes and health insurance for poor families.

“The hospitals are screaming too,” Bye said. “And they employ more people than many of the big companies that are screaming.”

“Our Families Can’t Wait,” a new coalition formed by advocates for the developmentally disabled and by SEIU-1199 New England – which represents unionized state social workers – issued a written appeal to lawmakers and Malloy on Monday.

“We firmly believe that a stronger Connecticut starts with protecting our most vulnerable citizens and those that care for them. People with intellectual disabilities are more than a line item,” coalition spokeswoman Peggy Embardo wrote. “They are our sons and daughters, our neighbors and our coworkers. Important and hard work from legislators and advocacy groups went into restoring the harmful cuts to developmental services. Undoing all that work now would be devastating for people with intellectual and developmental disabilities and their loved ones.”

“The governor listened to concerns and, because he’s a leader, took action,” Malloy spokesman Devon Puglia said Monday in response to Bye’s comments. “The legislature can now either make the necessary cuts or give the governor the ability to cut 1.5 percent across the board.”

Bye said it is a huge mistake to assume the tax changes Malloy proposed come at an easy price.

The governor said he wants to pay for them by reducing all spending not locked in by contract by about 1.5 percent.

“It is very populist to just say 1.5 percent, but it very quickly becomes more,” Bye said.

Funding for public employees’ salaries and benefits and debt service compose almost half of the budget, and they are locked in.

In addition, spending for Medicaid — one of the single-largest budget components at $2.5 billion per year — is a federal entitlement program providing health care for the poor. This means Connecticut must serve all applicants who meet program eligibility guidelines, regardless of whether it has budgeted sufficient funds to meet those costs.

Bye also noted that the budget already contains very large savings targets. Every year the legislature and governor build these into the plan to reflect savings achieved by employee turnover and other general efficiencies. And the new budget already increases the annual savings target from about $160 million to $200 million.

The governor, if he believes the budget may run in deficit, already has authority to unilaterally reduce spending many areas not locked in by contract – but not municipal aid – by 5 percent. That means social services and higher education could well be cut over the next two years just to help meet these savings targets, Bye said.