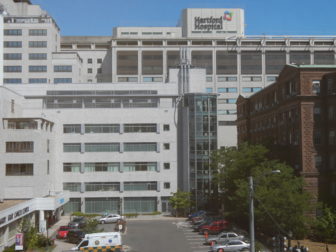 In a statement announcing the cuts, Jeffrey A. Flaks, Hartford HealthCare’s executive vice president and chief operating officer, cited cuts to federal and state funding for the system, which includes Hartford, Windham and Backus hospitals, MidState Medical Center and The Hospital of Central Connecticut.

“The magnitude of these cuts makes our model unsustainable going forward,” Flaks said.

The announcement Wednesday follows plans disclosed by the Yale New Haven Health System to close clinics in East Haven and Branford, which a spokesman said was the result of a substantial financial hit in the budget. Yale-New Haven Hospital would face a $48 million tax increase and $3.1 million cut in Medicaid payments under the budget in the upcoming fiscal year, according to figures from the governor’s budget office.

Hospital leaders have been trying to rally support for changes to the state budget that legislators approved June 3, which called for raising taxes on hospitals while reducing Medicaid payments. Gov. Dannel P. Malloy has not yet signed it and has called for changes to corporate taxes included in the package, although not to provisions affecting hospitals.

Hospital officials have also noted that the state funding cutbacks come on top of separate legislative efforts that effectively restrict their ability to cope with reduced funding by forming larger networks or affiliating with for-profit companies. A bill passed this session would add new regulatory requirements for hospitals seeking to join large systems or for-profit companies, and would restrict certain billing practices.

The budget effectively raises taxes on hospitals by $46.5 million while cutting payment rates they receive for treating Medicaid patients.

The hospital tax was introduced in 2011 as a way to generate federal revenue for the state, because of a quirk in federal law that allows states to tax hospitals, then redistribute the money to the industry and garner federal matching funds on the redistributed money. In the first year, the state collected nearly $350 million from hospitals and gave the industry back $400 million. But since then, the state has cut back on what it returns to hospitals, forgoing federal matching funds. This fiscal year, hospitals are slated to pay $349.1 million but get back only $96 million.

Under the budget passed earlier this month, hospitals would pay an additional $207 million in taxes. Of that money, $160.5 million would be returned to hospitals.

In addition to Medicaid rate cuts, the budget eliminates a $15.1 million funding pool for hospitals with higher-than-average shares of patients covered by Medicare and Medicaid and lower-than-average costs.

Jennifer Jackson, CEO of the Connecticut Hospital Association, said in a statement released shortly after the budget votes that the combination of “cuts, taxes and regulatory burdens, which endanger our hospitals and their patients, are devastating and unsustainable.”

Bristol Hospital now has a pop-up on its website that tells visitors that “The fate of Bristol Hospital is in serious jeopardy as a result of the cuts included in Gov. Dannel Malloy’s budget.” CEO Kurt Barwis was outspoken during the session, warning that the cuts that had been proposed could force his hospital to default on its bonds or close.

Hartford HealthCare’s announcement Wednesday said the company planned to eliminate approximately 335 fulltime-equivalent positions, affecting 418 staff members. In addition, the system is considering other changes to programs and services to reduce costs, including consolidations and reductions.

A memo sent to Hartford HealthCare staff Wednesday said job reductions would occur in every region and level of the organization, “from administration and managerial jobs to front-line positions.” The memo did not specify a timeframe, but said officials would work to ensure “that the period of uncertainty for staff will be as short as possible.”

Flaks said that in addition to the job cuts, the health system is looking to cut internal expenses. He emphasized the position cuts were “not draconian cuts.”

“Yes, they’re deep and they’re significant, but a thoughtful response, really, to ensure our vitality and to continue so that we can continue to be an engine for goodness in this community,” he said in an interview.

Yale New Haven’s plans to close two clinics would affect 31 employees, spokesman Vin Petrini said. “We’ve made a difficult decision, but a decision to close those facilities to begin to address some of the impact of the state budget,” he said.

Petrini said officials chose those clinics for closure in part because of the proximity to other services nearby. “You just simply can’t take the types of cuts and tax increases that we’re feeling without making some really difficult choices,” he said.

“This is a challenging budget year where difficult, often unpopular, choices were absolutely necessary,” he said. “As the state has to find new efficiencies to meet the challenging budget, the hospital industry will also have to find efficiencies to meet the changing industry. With that said, last year, the hospital industry did have one of its most profitable and lucrative years.”

“The bottom line is with this budget, we are working to transform Connecticut’s transportation system and provide property tax relief for middle class families, and we’re ensuring that those who should pay their fair share contribute to Connecticut and its long-term future,” Puglia added.

In the past, Malloy administration officials have noted that state funding to hospitals has increased dramatically in recent years. But hospital officials have countered that that’s largely because they are treating more patients with Medicaid, which pays less than the cost of care.

Senate Minority Leader Len Fasano, R-North Haven, who has been critical of the Yale New Haven Health System’s growth and business practices, said in a statement that the proposed clinic closures showed that the budget – which he opposed – hurt the middle class and health care.

“Raising taxes on our hospitals and lowering Medicaid reimbursements are two major hits that together will cripple many small hospitals in our state. The effect is broad and can now be seen on large health organizations as well,” he said.

“If making quality medical care accessible to everyone is truly a state priority, we have to seriously reassess the burdens placed onto our hospitals,” Fasano said.

Changes in state funding for hospitals
The net effect of state funding changes to hospitals in FY 2016, under the state budget approved by legislators June 3. The changes include cuts to Medicaid rates, the elimination of a funding pool for low-cost hospitals, and changes to the tax on hospitals. Some of the hospital tax money is returned to hospitals, so some facilities see a net increase.
Office of Policy and Management