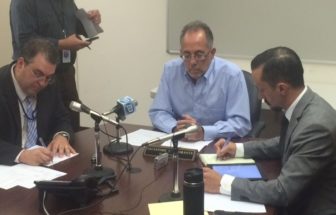 Open warfare erupted Thursday between the State Elections Enforcement Commission and the Democratic Party over an investigation into how the party financed its support for the re-election of Gov. Dannel P. Malloy.

Democrats launched an extraordinary pre-emptive attack on the credibility of the non-partisan elections agency before the vote, renewing tensions that erupted four years ago with the Malloy administration’s efforts to exert greater budgetary control over the autonomous watchdog agencies.

“They are taking it to an ugly place,” said Cheri Quickmire, the executive director of Common Cause in Connecticut. “This is just outrageous. The Democrats, the Democratic State Central Committee think they are above the law.”

The Democratic State Central Committee, which is accused in a complaint by the state Republican Party of illegally supporting the governor’s re-election with federal campaign funds, refused to produce documents or its keeper of records earlier this month, saying the commission overreached its authority in issuing the subpoena.

“The Democratic State Central Committee’s refusal to cooperate with this investigation, including but not limited to its unlawful defiance of a validly issued investigative subpoena, obstructs the commission’s ability to do its job,” Kevin Ahern, the commission attorney supervising the investigation, said Thursday.

The vote by the commission marked the first time in nearly 17 years the panel has had to seek court action enforcing a subpoena, Ahern said.

“We continue to hold out hope that the DSCC will change its course,” Ahern told three commissioners, two of whom participated in the special meeting by telephone. “However, the matter is now eight months old and very little progress has been made in securing the information necessary for this investigation to continue.”

David S. Golub, the attorney representing the Democrats, said the party was eager for the opportunity to argue in court that federal election rules preempt the state commission’s authority on the use of federal campaign funds for get-out-the-vote activity.

“We’re trying to get a ruling on this issue. SEEC won’t rule. And so we want to go to court. We welcome this opportunity,” Golub said. “That’s why we’re taking the position we’re taking.”

Before voting publicly, the commission met for seven minutes in closed session to discuss its only real option: Formally request the office of Attorney General George Jepsen to ask a Superior Court judge to enforce the subpoena.

Jepsen, who was Democratic state chairman a decade ago, has recused himself. His deputy, Perry Zinn-Rowthorn, is the acting attorney general in all issues pertaining the case.

Zinn-Rowthorn said his office would review the request with the commission before deciding on whether to go to court.

J.R. Romano, the newly elected state GOP chairman, quickly praised the commission’s action in the complaint that was filed by his predecessor, Jerry Labriola Jr.

“I’m very proud of the State Elections Enforcement Commission, and I think what the state of Connecticut needs to realize is this is Democrat leadership,” Romano said. “Not a Democrat mayor, not a single Democrat representative, not a single Democrat across the board called for the party to answer the subpoena. They live in a fantasy.”

At the center of the complaint is a mailer promoting Malloy late in the campaign by the Democratic Party, a relatively insignificant element of the 2014 race for governor, which was dominated by multi-million-dollar television buys by the campaigns and independent groups. But it raises a crucial question about campaign finance.

The state parties raise funds under different rules for two accounts dedicated to state and federal campaigns. State contractors are barred from giving to state campaigns under reforms adopted in 2005, but they are free to contribute up to $10,000 to the federal accounts.

Under federal campaign rules, the federal accounts must be used for all get-out-the-vote activities in federal election years, which coincide with every election for governor. The party’s Malloy mailer contained general information about polling hours, which the Democrats say made it a legitimate federal expense.

The conflict has produced an unusually aggressive stance by the dominant Democratic Party, whose members hold every statewide and federal office and control the General Assembly, and the non-partisan elections enforcement commission.

Democrats first sought a declaratory ruling from the Federal Election Commission on the preemption issue, then abruptly withdrew the request.

In a letter sent Thursday to the commission, the party attacked the credibility and impartiality of the state commission’s staff, a move the GOP’s Romano called an obvious effort at intimidation.

Kevin Reynolds, a lawyer for the Democrats, complained in the letter about the release of documents, including emails shared with Jon Lender of The Courant under a freedom-of-information request that indicated the FEC was not favorably disposed to the party on the preemption issue.

The Democrats also had obtained the commission’s emails to discredit the investigation.

Reynolds accused the commission of leaking the issuance of the investigative subpoenas to a television station, NBC Connecticut. He also questioned the propriety of the commission’s asking advocates and elections enforcement authorities in other states to lobby the FEC on the preemption issue.

“It is clear though emails we have obtained that SEEC staff members demonstrated a political agenda throughout this process,” said Leigh Appleby, a spokesman for the Democrats. “Let’s be very clear: this is a state agency tasked with fairly and impartially enforcing election activity, but it is abundantly clear that the SEEC had their mind made up before even hearing the important legal issues at hand.”

Joshua Foley, a spokesman for the state commission, declined to comment on Reynolds’ letter.

Romano said the commission is a public agency, and the Democrats’ objection to the release of information was odd, given it, too, sought and received emails under the Freedom of Information Act.

“If the Democrats are unwilling to allow the public to see what’s going on, they should do some soul-searching,” Romano said.

Others reacted with alarm to the tone of the dispute.

Tom Swan, the executive director of the Connecticut Citizen Action Group, which backed the passage of campaign finance reforms in 2005, expressed hope that the party and agency will find a way to de-escalate.

“We think that all parties should tread carefully in this regard. Maintaining the integrity and the independence of the watchdogs is vital to the functioning of government,” Swan said. “The agencies need to act in a manner that is above reproach, and the administration needs to resist all temptation to act in a manner that could have them perceived as attempting to intimidate.”