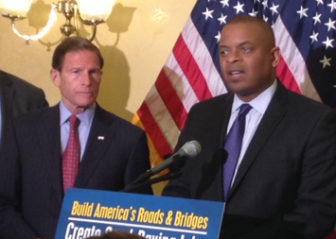 Washington – Congress faces a looming deadline to approve a highway bill if it wants to keep federal transportation dollars from slowing to a trickle, but there’s no consensus on what to do.

Sen. Richard Blumenthal, D-Conn., on Thursday joined a press conference with Transportation Secretary Anthony Foxx and other Democratic senators who criticized Senate Majority Leader Mitch McConnell, R-Ky., for failing to unveil his transportation plan. McConnell said he would put up a transportation bill in about two weeks.

Democrats like Blumenthal and Schumer are rejecting a short-term fix to the problem posed by the imminent insolvency of the transportation trust fund, financed largely by gasoline and diesel taxes. Fuel-efficient cars and a drop in the number of miles Americans are driving every year has reduced revenues to the trust fund.

Unless Congress acts fast, Foxx said, there will be a “crisis point” at the end of July or beginning of August and he would soon inform each state that they will have  a cutback in transportation funding.

Judd Everhart, spokesman for the Connecticut Department of Transportation, said the state has enough money to continue existing projects, but only for a while.

Everhart said the department “ would not do any re-evaluating  (of its transportation plans) until we are absolutely forced to do so.”

“This is a game that some in Congress seem to enjoy, keeping the states – and their constituents – in suspense until the last minute,” Everhart said. Gov. Dannel Malloy’s administration “is forced to make contingency plans… only to have Congress pass another extension at the 11th hour,” he said.

That money has drifted down from the $633 million the state received in 2010 to about $603 million last year.

According to CDOT, the state  receives more than $50 million from the highway trust fund each month.   If these payments  were to be slightly reduced, the state would continue all ongoing work, covering the shortage with state funds for the short term.

But if federal payments  were significantly reduced, or stopped completely, it is likely that new projects would be halted and ongoing construction could only continue for the very short term, CDOT said.  The agency also said cash flow quickly would become a significant problem, jeopardizing even active construction projects.

Congress has already passed one short-term highway fix this year — a funding “patch” ends on July 31. There have been more than 20 similar “patches” over the past decade.

The policy problem is that there’s no consensus on how to increase revenues to the highway trust fund.

There’s little political will to raise the gasoline tax, although Sen. Chris Murphy, D-Conn., and others back that idea.

So Blumenthal and other Democrats on Thursday promoted a plan that would  shift the international tax code to a territorial system and use the revenue from the transition to replenish the trust fund.

Rep. Paul Ryan, chairman of the House Ways and Means Committee, said Thursday that there isn’t enough time for a long-term highway funding bill to pass Congress before the August recess, and that a shorter fix through the end of the year is likely.

Blumenthal said there must be an end to the “patch and pray” approach to transportation, especially since crumbling infrastructure hurts local – and even the national — economy.

Blumenthal also said a long-term highway bill is needed because “uncertainty is an enemy” of economic development and state abilities to plan big, multi-year infrastructure projects.

He said an abrupt decrease in funding would be “devastating” and “could throw into turmoil” Connecticut plans to repair and replace crumbling roads and bridges.