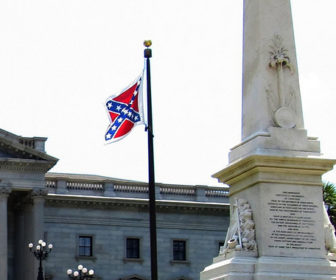 The Confederate battle flag flying outside the state capitol in Columbia, S.C.

Washington – As South Carolina prepared to take the historic step of removing the Confederate battle flag from its capitol building, members of Congress on Thursday engaged in a bitter dispute over the controversial emblem.

The acrimony boiled up in the House of Representatives, which was debating a bill that would fund the Interior Department.

Two days ago, Democrats had been able to include amendments to the funding bill that would ban the placement of the Confederate battle flag on gravesites in national parks, like Antietam. They also barred the National Park Service from selling battle flag merchandise in bookstores and gift shops.

But late Wednesday a number of Republicans revolted against those measures and told GOP leaders they would not vote for the Interior bill unless those provisions related to the Confederate emblem in the parks were removed.

Rep. Ken Calvert, R-Calif., was tapped Thursday to offer an amendment to reverse the ban of the flag in national parks.

That’s when a firestorm broke out, with several Democrats accusing Republicans of racism.

Rep. Hakeem Jeffries, D-N.Y.,  an African-American, brought a poster of a  Confederate battle flag onto the House floor and put it next to him on an easel as he spoke.

If the Confederates had won the Civil War, he said, “I’d be here as a slave.”

“Allowing this flag, which serves as a symbol of hatred and a reminder of one of our country’s darkest periods of division, to be displayed or sold at our National Parks is simply unthinkable,” DeLauro said. “Amazon, Wal-Mart, Sears and a host of other private national retailers have all pledged to stop selling Confederate flag merchandise, yet Republicans want the National Parks to be able to sell it.”

Wednesday, family members of the victims of the racially motivated slaying of nine black members of a church in Charleston, S.C. had visited the U.S. Capitol to demand stricter gun laws.

“Just one day after these leaders and mourning families from Charleston were at the Capitol demanding change, House Republicans demand a vote to preserve display and sale of the Confederate flag,” said Rep. Elizabeth Esty, D-4th District. “This tactic is shameful and insensitive. This rebel flag carries a strong offensive association that is harmful and hurtful to many Americans.”

Like many Democrats, Himes said the only place for the Confederate battle flag is a museum. 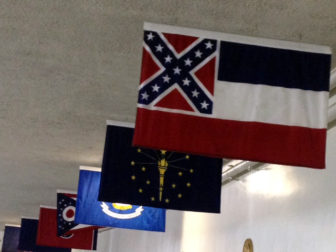 A Mississippi state flag hanging in the U.S. Capitol.

“I don’t want to see this become a political football,” he said.

Boehner also asked for a review of Confederate symbols and memorabilia that are  on display in the U.S. Capitol.

But House Minority Leader Nancy Pelosi, D-Calif., wanted to put Republicans on the record on the issue of the Confederate battle flag. So she pressed for a vote on a resolution that would require the removal of “any State flag containing any portion of the Confederate battle flag, other than a flag displayed by the office of a Member of the House, from any area within the House wing of the Capitol or any House office building, and shall donate any such flag to the Library of Congress.”

The move was aimed at the Mississippi state flag that incorporates the Confederate battle emblem in its upper left corner.

The House voted 238-176 to send the matter to the House Administration Committee, where a similar measure was already pending. All but one House Republican voted to send Pelosi’s resolution to committee, while every Democrat opposed the move.